Our Adventures in France 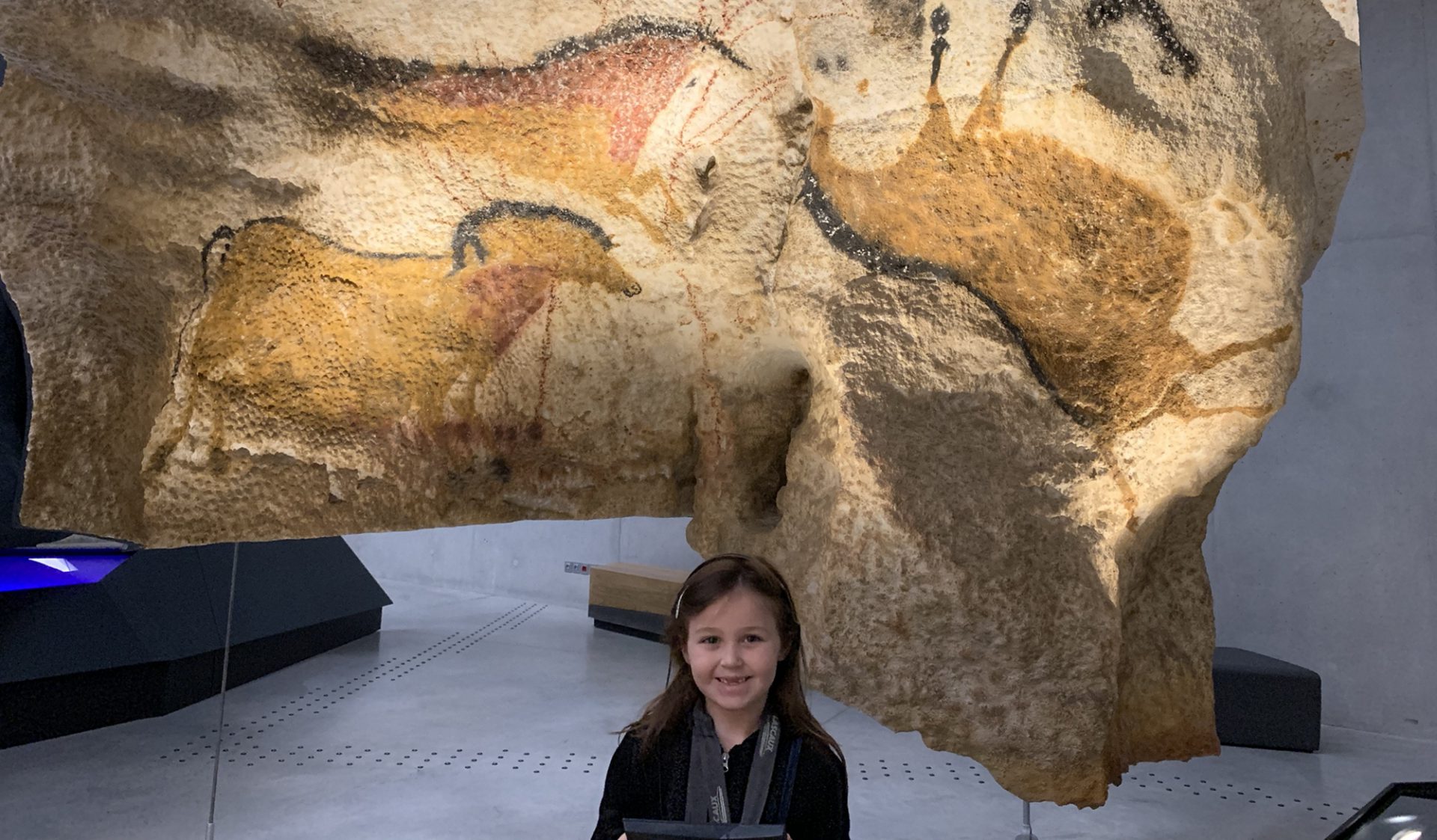 At the end of March we finally started traveling, we got a ferry to France. We have been travelling around, going on adventures, seeing amazing sights, making friends, learning a little French, having trouble finding campsites and aires for our large RV, not liking the food but having a great time.

This was my first ferry trip, I was amazed at the size of the ferry and as we drove onto it I was a little scared, but once we found a seat and met daddy (he had to park in a different part of the ferry) I was feeling better and excited. I enjoyed seeing the cliffs and the wide open sea. There was a helpful map on a screen that told how far we were from France. I had a bacon sandwich for breakfast and a bottle of water, and before I knew it, we were in the car again, but this time in France! It was a little strange, as you drive on the right side of the road and go around roundabouts the wrong way in France.

In France we went to many amazing and interesting places, these are some of my favourites:

We went to a WWII V1 launch site and wild camped for a few nights. V1’s were the first unmanned bomb in history, they could go 250km in 25 minutes! The V1 site never got used because a spy told the allies where the site was so it was bombed before they even sent the first bomb, good news for London, where the bombs were pointed, but bad news for the French.

At the V1 launch site, there was a map about all the V1 sites in France, orange ones meant bombed, red ones meant non-bombed ( survived) meaning they sent bombs to England. There were several memorials at the site one of a lady crying holding a child which was very sad and represented the families killed when this site was bombed.

I found it a sad but interesting place, I did not realise how far the bombs could fly or that they were unmanned. Also finding out that a real spy help stop this site from being used was very cool.

We also spent some time having fun in the woods. We collected logs and made a great den.

At Le Mans, we saw some of the remaining ancient Roman wall, which was really tall. There were many towers built in to the wall it was amazing to see and be able to touch something so old. The patterns in the wall were very pretty. We walked round the medieval town and although the buildings were pretty and I enjoyed seeing inside the Cathedral I did get quite bored an fed up with the walking.

So mum and dad decided to take me to a lovely park in the city centre, though it sadly did not have any play equipment, but we played tag and looked at a great big sand timer which was very cool. During lunch I was trying to learn some French and managed to say ““tres bedong” instead of “tres bon” (very good) which was just so funny and we laughed for ages.

We also went to Le Mans 24h race track and museum, we were lucky to find some racing taking place and spent some time sitting in the stands and walking round the track watching the beetles racing, it was brilliant. I picked a beetle that was shiny and cheered him on. It was really good fun though a little loud but we remembered my ear defenders which made it loads better.

Inside the museum, we saw the beginnings of companies, like Porsche, Ferrari, and Ford who helped the race industry. There was a gallery full of race cars from beginning of race history to modern day. It said that new ones are being produced every day to be more better for the world, including for disabled people and energy and environmentally kind ones.

This was a replica of a cave, the first cave was discovered years ago, but the paintings were getting damaged by us, so they had to close the cave.

A replica was made so people could learn and still enjoy it. A fun tablet was given to every one of us, which us to hear our guide in the cave and was interactive in the museum. I had a fun children’s one that had games and things to find around the museum. One of the games was to find tools and rocks one the floor to use. I gathered things to make paint and I unlocked the ‘rock painting’ activity, it was really cool. I also made fire using sticks, flint and kindling.

There were amazing paintings, like a black bull with the red head. There were two bulls that were different, one was black with a red head, the other was black with a red head and red patch in the bulls body, this showed the difference in seasons, the wool fully on in winter, it shedding in summer. There was also a upside down horse witch was funny. I think they were good artists, they were great ishes! I also learnt they didn’t live in caves, they sometimes did but mainly used it as a art gallery, they really lived outside in huts.

The ghost town is a permanent memorial to all those who died here in WWII. The whole town was killed by the Nazis as they thought they were hiding the leader of the French Resistance and were hiding a spy. Even though they died here and this place is very sad, we are lucky that the memorial is here or we’d never remember this beautiful but sad place, that reminds us why we should get along and talk things over rather than fight.

I put my photos in black and white as I felt it was more fitting.

I had a great time at Beziers Adventure which is a high ropes course in the trees, although I did hurt my finger which was sad. Mum had to do it with me and it was a little funny and surprising to see her a bit scared on some of it. It got very tricky at times and I did not think I could do it but mum and dad encouraged me and we made it. I loved the zip lines.

At various locations, we saw a few Bats flying around. We stood watching one and every time we said “it” it came back, so we called it, It.

We also saw caterpillars and I learnt that the hairy procession caterpillars are poisonous. We have also seen a few very large snails.

We found a snake while we were walking at a gorge, I reckoned the snake was a baby, it wanted to cross the path, but it changed it’s mind. So it went back into the leaves.

Another day, we were going to a museum, and on the way we saw baby fox’s! They were really cute! Small little foxes with tiny paws, golden fir, small head and piglet eyes too big for their heads. I LOVED them, and wanted to cuddle them, but another car came so we had to move and they ran off.

There’s been some funny times, like the lizard moments. We’ve seen loads of lizards. Once we were at a hot castle on the top of an old volcano, it had a lovely garden we looked round, i found a crack, in a rock where I saw a lizard, so I laid my hand out next to it and the lizard came out of the crack and licked my hand! It was awesome.

We also found a lot of Swallowtail butterflies in one area next to a river which was beautiful, I learnt this is called a Kaleidoscope.

I hate food shopping, it takes so long, its so noisy and boring, even more so in France as everything is in French!

I enjoy selecting my own fruit and weighing them on the digital scales, then sticking the printed label onto the bag.

I was real surprised to find in supermarkets crabs, lobsters and clams living in tanks waiting to be sold to be killed and cooked. It was as horrible as any thing! i thought it would be nice to buy them, then set them free.

The butter is horrible, white, creamy and they put to much in their food, I don’t like eating out, thankfully mum still has butter from the UK so I can still have sandwiches. We can’t get garlic bread, so mum makes garlic butter at home so we can have pizza the way I like it.

I hate all the sea food! Oh and its really hard to get Cheddar cheese!

We have learnt french from french people. and our phones. even though I can’t use my phone to do that. mum and dad helps me learn french words like:

I made some friends, and got to spend quite a bit of time with Minel and Libby. We met them after we got to an aire that we ended up staying at for a few weeks. I had great fun with them, their mother knew some English which made it a little easier to play with them. I also learnt French from them, like toucher and taught them a little English.

I also made friends with a grown up English couple who played football and ping pong with me. We all spent lots of time talking and having a laugh.

What I Think of Travelling

I really enjoy travelling, its been an amazing adventure. Sometimes its hard, I miss my family and friends, and we still have to do boring things like washing, washing up, cleaning, going shopping and doing jobs. We still have arguments over silly things just like we would at home, like what to wear, rushing me to get dressed, brushing my hair, having showers and over me not tidying up!

I love having a big campsite to explore, playgrounds to play in and even swimming pools, but wish there were more kids to play with.

Going on such great adventures has really inspired me to write lots of little stories and make up games.

The Joy of Sat Nav – Tight roads, restrictions and getting to Campsites

The idea of traveling