The Joy of Sat Nav – Tight roads, restrictions and getting to Campsites 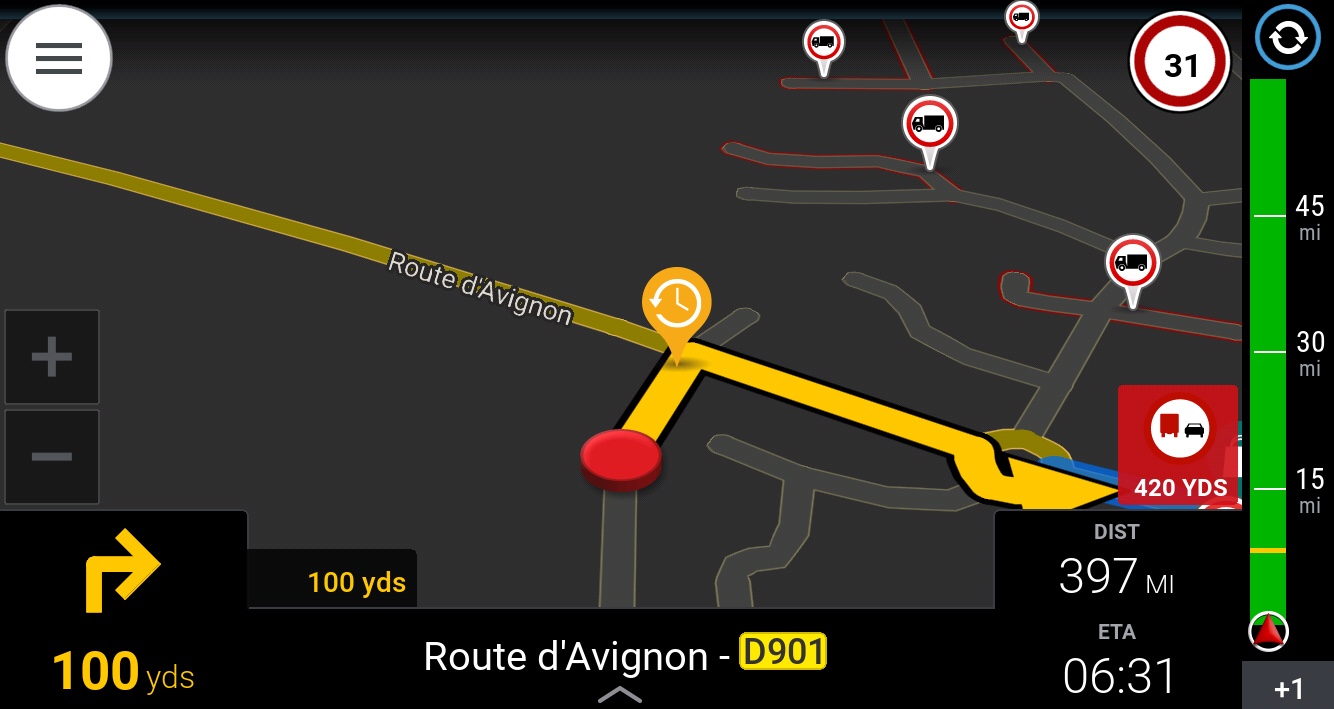 Ah, the sat nav, where would we be without them? Well, still using regular maps probably. They’ve come a long, long way from PDA based apps that required a separate GPS and yet, like many things, they’re not perfect yet.

One of the many things we didn’t think about before we started this adventure, was sat navs for big vehicles. Of course, we saw news articles about stuck lorries, and motorhome owners driving under too low bridges and thought “Why don’t they just use their common sense?”. It didn’t even occur to us that there could be a breed of sat nav designed specifically for them.

But there are. Quite a few of them in fact. From major standalone players like Garmin and TomTom, down to smartphone-based systems like Sygic and CoPilot. Most (if not all) of these systems allow the user to enter in a vehicles type, weight, height and length so that the route they plot is customised for them.

Much like a car satnav, a truck nav is not infallible. They rely on the maps being accurate, and they really rely on restrictions being accurate. A truck nav doesn’t necessarily know the difference between a wide road with plenty of space, and a narrow country lane, hemmed in by hedges and trees.

And so it was. Just a few weeks into RV ownership. That we found ourselves on a tight, curving country lane. Huge hedges to the left, and hedges to the right. Not enough space for our RV and another vehicle to pass each other. We drove along, hoping that nothing would come the other way…

But it did. A car popped around the corner in front of us, and we both had to stop. Then a van appeared behind that, and two more cars behind us. We were in a proper pickle. Thankfully, in this instance, the van and car in front were able to reverse into the entrance of another road, and we were on our way once more.

Why didn’t I just use common sense?

Though we were only just realising it, our sat nav had just let us down hard. We spent 7 miles on that country lane! Stopping and driving into hedges, driving with the mirrors hovering over stone walls until finally, we reached a bridge with a weight restriction that we could not cross. Fortunately, at this point, the road was wider and we could stop while traffic passed.

By the time we realised that the regular sized road we were driving on was getting too narrow, we had no opportunity to turn around. Our choices were to either carry on, in the hopes that things would improve, or try to reverse a huge distance to a turning area. We had fallen victim to stuck trucker syndrome.

We weren’t the only ones either. While we decided what to do at that restricted bridge, a full size, 40+ tonne articulated lorry came over the bridge the other way and attempted to drive along that torturous 7-mile journey that we had just completed. I hope they made it, or they might still be stuck now.

So, stick to the major roads right? Motorways, A roads and their European equivalents? Well, that’s just fine until you remember that campsites tend to be in out of the way places. People who go to campsites, generally want to get away from big roads and towns. So with few exceptions, those last couple of miles are always going to be the danger points.

When you consider that in the UK a single motorway lane is 3.65m wide (12 feet), even new country lanes can be just 5.5m wide (18 feet) for both vehicles to pass each other. Even if it’s expected that buses will regularly use it, then the lane still only needs to be 6m wide (19.5 feet) unless there’s another reason for it to be wider.

This has acted as something of a baptism of fire for my truck driving skills though! Weaving in and out of parked cars, avoiding hanging tree limbs, making space for other vehicles, taking up the required space for turns etc has all become a part of my driving repertoire because I’ve had to learn it.

Which is the best satnav to get then?

We’ve been using Copilot Truck on iOS for the moment. It’s not been perfect (see above), but it does a reasonable job. The biggest failing it has is that it uses Yelp for online address search, which of course, sucks.

After the restricted bridge scenario, we happened across the caravan and motorhome show at the Birmingham NEC, where I hoped all the major players would be present and I could pick the perfect replacement. But not everyone was there (notably Garmin was absent), and most of the demos couldn’t alleviate my existing concerns with Copilot. At £300+ for the mid-top models, buying the wrong one is an expensive mistake to make.

Further to that, I couldn’t find anyone with a dedicated device that could promise me live traffic based route changes like you can get on a smartphone! TomTom managed that years ago on their standalone car units. If I’m driving several hundred miles in a day, I want to know if traffics building up ahead before I get there, especially as with a big vehicle, I won’t have so many options to get past.

In the meantime, we just rely on the sat nav, and look at those last few miles as closely as we can on Google maps before we decide where to go!

So if you’re out there sat nav makers, reading this. I know it seems unlikely! But if you are, what I am looking for is a sat nav which has:

Our Adventures in France