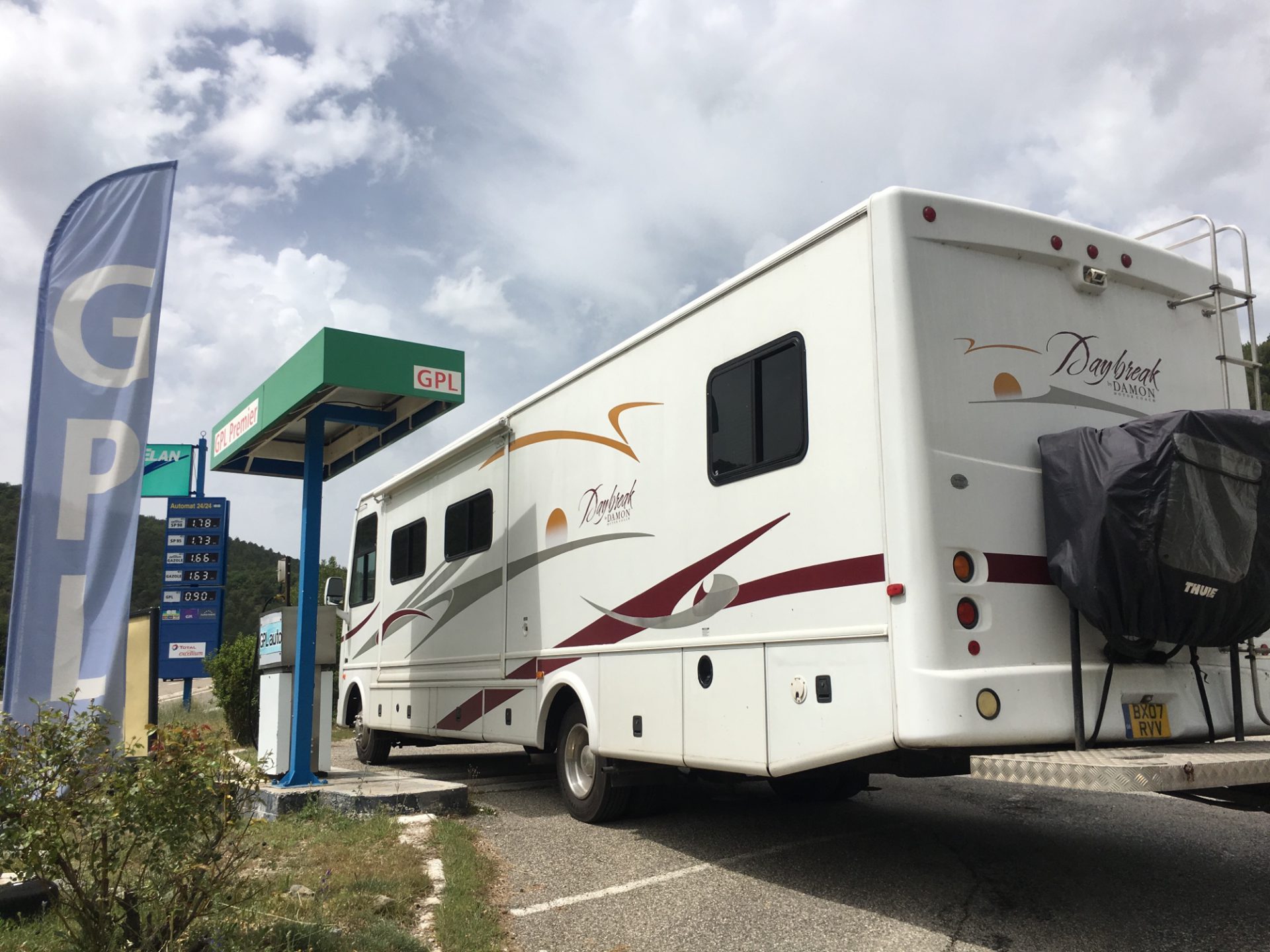 When we were deciding between getting a gas or a diesel RV, one of the few things we were sure about was that if we got a petrol RV, it needed to run on LPG. LPG is cheaper than petrol in Europe because it’s better for the environment, and we were assured by many people that it was widely available on the continent.

In the UK, we’ve been a bit hit and miss with getting fuel, but we’ve always managed. What’s the story like for France though?

GPL, GPL everywhere, and not a drop to drink

LPG (or GPL as it’s known in France and many other European countries), is available at many, many fuel stations. Adverts for stations even put a little +GPL statement to let you know that they stock it. Motorway service station signs have a little +GPL if it’s available, and if not, a distance to the next one that has.

All in all, France is great for GPL. We’ve even seen plenty of regular cars filling up on the various pumps. Even supermarkets often have GPL. It’s almost as easy to get GPL as it is any other type of fuel.

You see, most of the petrol stations in France have height restrictions, usually between 3.3 and 3.5m. That includes many of the stations on the Autoroute.

In addition to those height restrictions, many of the stations that we have seen use a chicane, curb or other devices to shield the GPL pump from bigger vehicles. All of which means that we haven’t always been able to fill up.

Of course, sometimes other things get in the way of a good fill up. At more than one station, they’ve run out of gas. Which is understandable, and happens. However, nothing could contain our fury when we finally found a GPL station on our 8-hour trip down to Limousin than this supermarket station which had closed the GPL pump for lunch!

What this means is that we regularly go a few hundred miles without seeing a GPL station that we can fill up at. And I get to watch the (very inaccurate) Prins fuel gauge drop down until the red light comes on, and the RV switches over to burning petrol.

When this happens, we get a little less choosy about the places we’re filling up. We’ve reversed through the exit to a petrol station plenty of times. With permission, we’ve even driven the wrong way through entire motorway service stations so that we can avoid the height restrictions. Though nobody has managed to tell us what purpose the height restriction serves, most of those stations had at least 5m of clearance, and I doubt many lorry drivers would bypass the dedicated, fast, easy access diesel pumps for the chicanery of the car section.

To be fair, this Shell station has it’s GPL in the lorry section of the site, so it does need some protection. Most are well away from lorries and cars though and yet are still inaccessible for us.

Occasionally though, luck shines her light upon us and the GPL pump is right there in an easily accessed location. There are no restrictions on height or width, and we can simply drive in, fill up and move along.

Looking on Google maps at GPL stations, there are lots which should be accessible. But that doesn’t mean that they will be OK when we get there. And of course, they may not be on the route we need to take!

So is LPG still worth it on the continent?

In France, we are finding that we only really get any luck at the pumps along the Autoroute. That means we’re often paying as much as €1.00 per litre when we can get petrol for €1.40 on the regular roads, it’s sometimes almost as cheap just to use petrol. Certainly, any diversion for GPL can end up costing.

The reason for that is that LPG is 20-25% less fuel efficient than regular petrol. If the difference in price is less than 30%, you don’t have to drive far before you’re burning more LPG than you save in the purchase cost.

Of course, France isn’t the only country in the EU, and we had a very different experience in Italy.

Interesting what your experience is. One think is wired. LPG /GPL has nirmaöly the same high of kWh per liter than petrol (Not Diesel), and even higher Level of oktan. So normally consumption must be the same. Except, and that would be a pity, your Motorsetting ist Bad. Maybe you or your Garage can fix this

LPG actually has a lower calorific value than petrol, which leads to a decrease in power, which then affects efficiency because the driver keeps the throttle open for longer. With the V8 Vortec engine our RV has, it can actually be run on LPG or CNG, and with appropriate timing adjustments should be almost as efficient as when running on petrol. However, we don’t think our Prins system has that much optimisation, given it has to switch between petrol and LPG on demand.