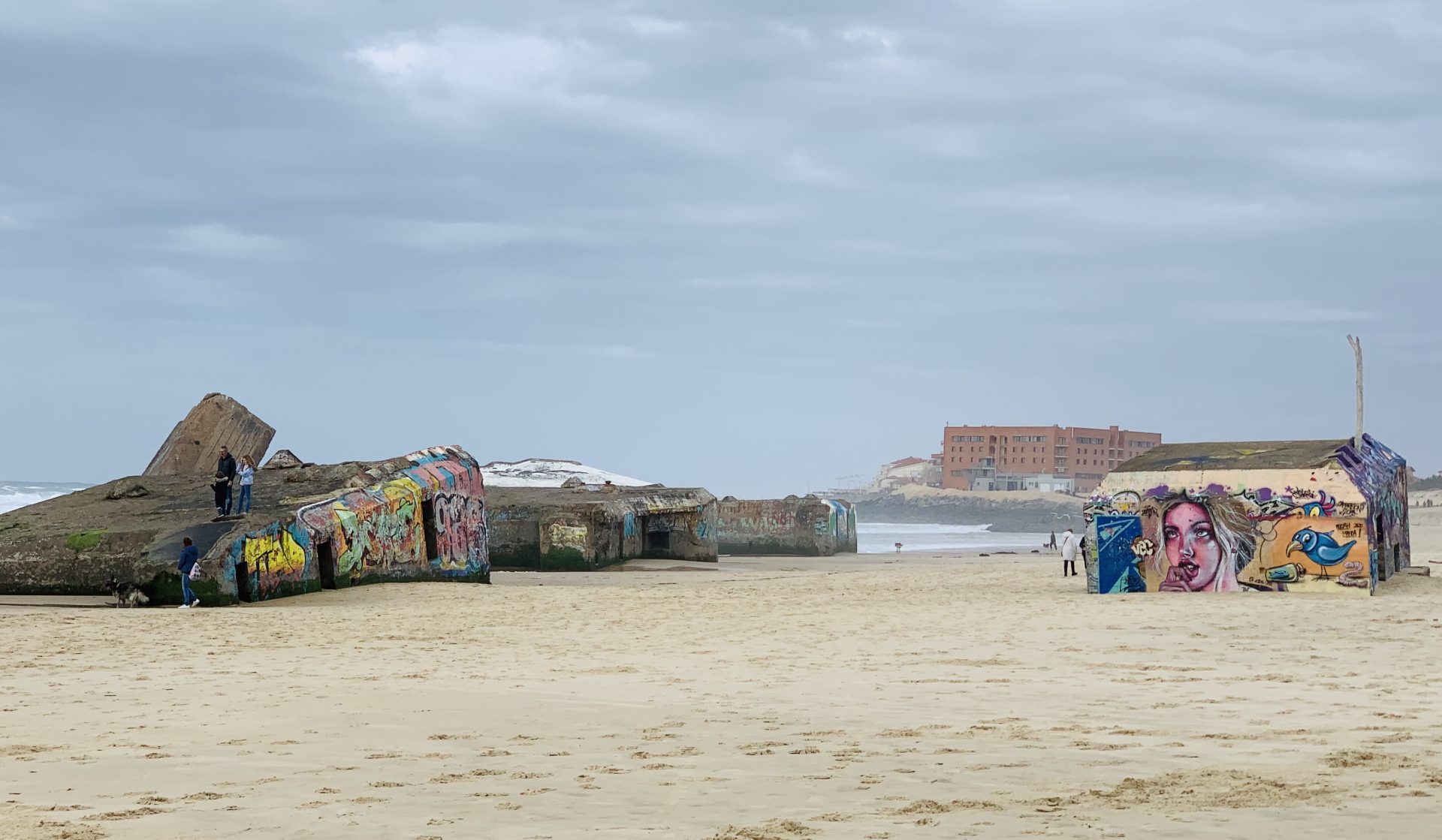 With the weather set to turn very wet and windy again, we decided to bypass the Dune du Pilat and head down towards Spain. Looking at the map, we decided to stop at Capbreton Aire de Camping-Cars which was recommended, and helpfully about midway between Parc Verger and Madrid.

The first part of our journey was along some country roads, but they eventually gave way to dual carriageways and the miles fell away. The entrance roads to the aire were very tight, so we decided that the next day we’d need to identify a better route using the car.

Being right on the beach, we had to head onto the sand. Some minor misjudgments of the waves lead to Olivia and George getting very wet feet!

Thinking this would be our last chance to stock up on French essentials, like their milk and cheeses, as we didn’t know what the food would be like when we got to Spain. We planned to go to the supermarket the next day. You can tell this was the first week of the trip because we completely forgot that France would be closed because it’s Sunday! Thankfully, bigger stores are starting to open on Sundays so a hasty run to a hypermarket was managed! We got out about 20 minutes before they closed. At least the car park was quiet.

Sunday afternoon, we took a walk on the beach at Capbreton in the Bay of Biscay. With the sun out and lower winds, it was really pleasant to be out there, and lots of other locals seemed to think so too. Lots of dogs off their leashes which wasn’t great for Pepper but they seemed to be having fun.

We spent most of the walk playing chicken with incoming waves again, and mostly winning! Though right at the end George got wet feet again!

The Atlantic Wall at Capbreton

Part of the reason we walked on the beach was that we’d seen some odd structures the day before, and I found out that they originally formed part of the Atlantic Wall, a 5,000km fortified coastline built by the German army during WWII. The wall was built to protect from allied landings, which obviously didn’t happen at Capbreton and since then the bunkers and gun turrets have been left to rot. We walked along and looked at these concrete husks. The accessible ones are covered in amazing graffiti for the most part. While the ones in the water only have a little paint as I guess it gets washed away too quickly.

Olivia and I climbed one which was at the edge of the water and when big waves came in the water would surge all the way around it and block the exit! There was a family exploring inside another who had to lift the kids through holes in the ceiling as the waves rose high enough to start filling the interior!

Olivia asked why they put them in the water, so we explained, originally these were built high up on the edge of the dune that forms the back of the beach. However, erosion has worn away the sand underneath and allowed these huge reinforced concrete buildings to fall and roll out into the water! I can’t imagine how loud those falls were or what the people of Capbreton thought when it happened though. That evening we watched an episode of Nazi Megastructures which talked about the Atlantic wall and gave us all some greater insight into what these buildings would have been like when in use.

Certainly an interesting and pleasant stop for a few nights.

Lovely read..hope you guys can stay safe in these troubled times.