Le Puy en Velay – Buildings on the Shoulders of Giants 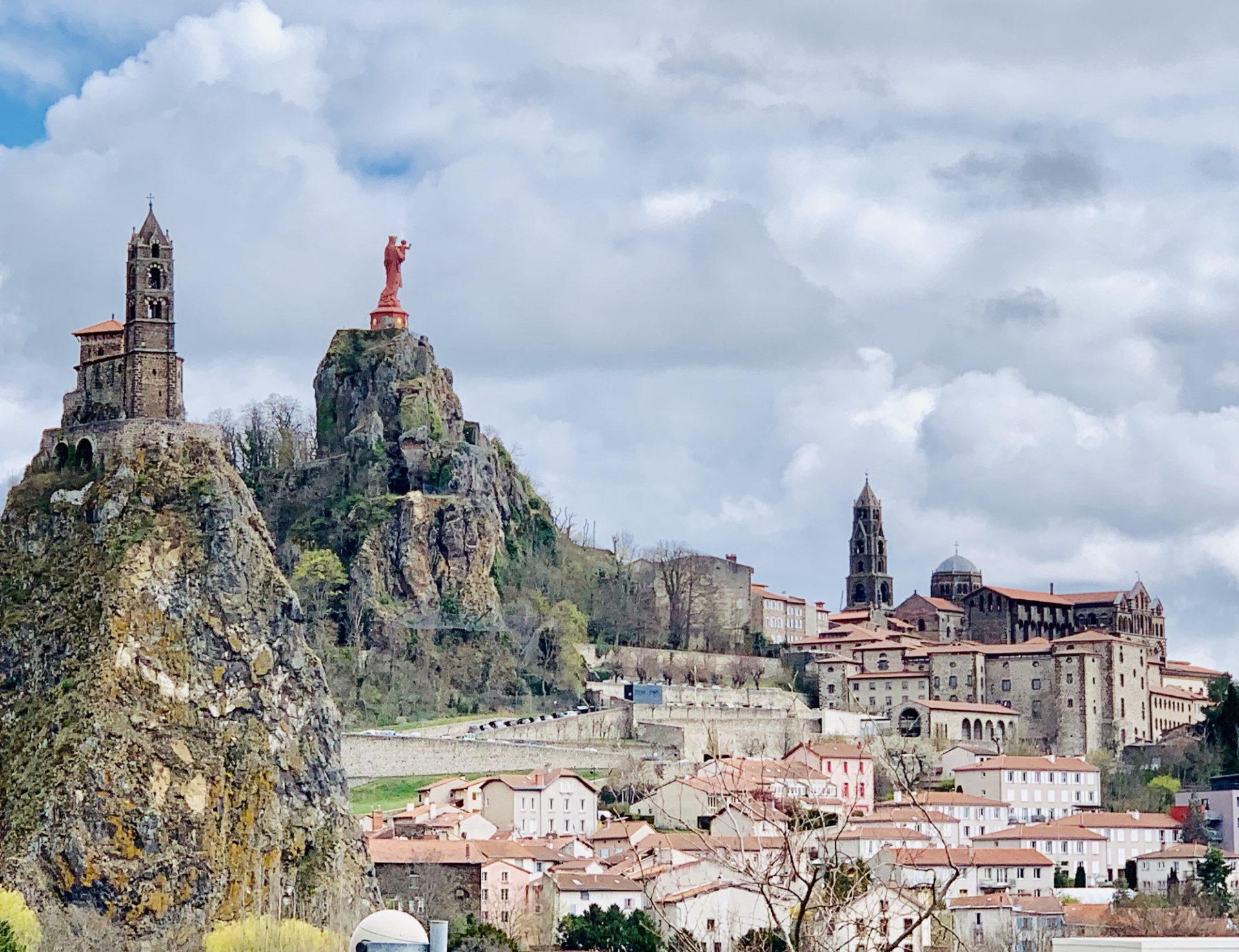 Our next travel day took us to Le Puy en Velay so that we could see (and not climb up!) the statues and church which have been built upon the volcanic outcrops within the town.

In the town of Aiguilhe where we stayed there is the amazing Saint-Michel d’Aiguilhe chapel.  It was built to celebrate the return of the pilgrimage of Saint James. It was built in 969 on a volcanic plug 85 meters high. The chapel is reached by 268 steps carved into the rock. There is also the wonderful statue of Our Lady of France on the top of another volcano which you can also climb a ladder inside of. Although we did not climb these volcanoes, we did drive around the town admiring these amazing buildings and monument, and enjoyed seeing them all lit up at night from our aire.

We found a great large space, with a view of the town but the aire was very noisy with the traffic and the train line just the other side of the road! This is a new aire though – we can tell that as the RV sat nav thinks it’s a road that we should have used! But for €13 a night including water, WiFi and electricity it was a good location for the town.

Just as we were about to arrive in Aiguilhe, we saw this fantastic looking castle on a huge rocky hilltop in a neighbouring town, and decided it needed further investigation. Turns out the Fortresse Polignac has over 1,000 years of history, and has stayed in the Polignac family for almost all of that time.

We bought tokens to enter the fortress from the tourist office in the beautiful town built on the lower sections of the volcano, along with an English leaflet guide. (The tourist office shuts for two hours at lunchtime so you have to make sure you get your tokens before then). We then slowly started our walk up the steps and steep winding path.

The castle was well defended, the steep path up had six security gates that an invader would need to break through. The last two gates (known as the mousetrap) have a tight 90 degree turn between them, and invaders would be surrounded on all sides. The final gate eventually featured cannon ports to really see off the enemy!

Once up there, it’s a surprisingly large space, with beautiful views and a lot of history. Including one of Olivia’s favourite parts, the pit of Apollo, where pilgrims would travel to ask Apollo questions. Unbeknownst to them, the pit wasn’t endless, and actually had a secret chamber a few meters down as well as a hidden path through the rocks. Priests would ask pilgrims their questions before they started the climb, and then tell more priests in the secret chamber what the questions were. Once the pilgrims arrived at the top, their questions were answered through a booming, echoing voice before they had even asked them! No doubt tales of this legendary site of Apollo will have spread far and wide for its fortune telling abilities!

There were a few fun games from the time set up in one of the buildings and out on one of the grass sections, unfortunately the instructions were all in French so we could only try the ones we could work out.

There is a beautiful herb garden with amazing views of the town below and an abundance of wildlife. Much to Olivia’s delight there were many wild wall lizards, one of which she managed to get close enough to it licked her hand. I loved watching the amazing hummingbird hawk moth collecting nectar.

We climbed to the top of the impressive 32 meters tall Donjon tower, being so straight and perfect still it looks somewhat out of place among the other ruins, but the views from the top were spectacular.

This was a real gem of a find, it dominates the surrounding countryside and the leaflet in English described the castle and its history very well. We had a delightful sunny day with beautiful views. It was great looking down over the walls onto the small town below, it certainly would have been an amazing stronghold.

This is a lovely area and if we had found a nicer place to stay and we were slightly fitter we would of stayed longer.

Loving your journies, even the ups and downs. More ups though 😃

Thank you. I am glad you are enjoying our blog. x