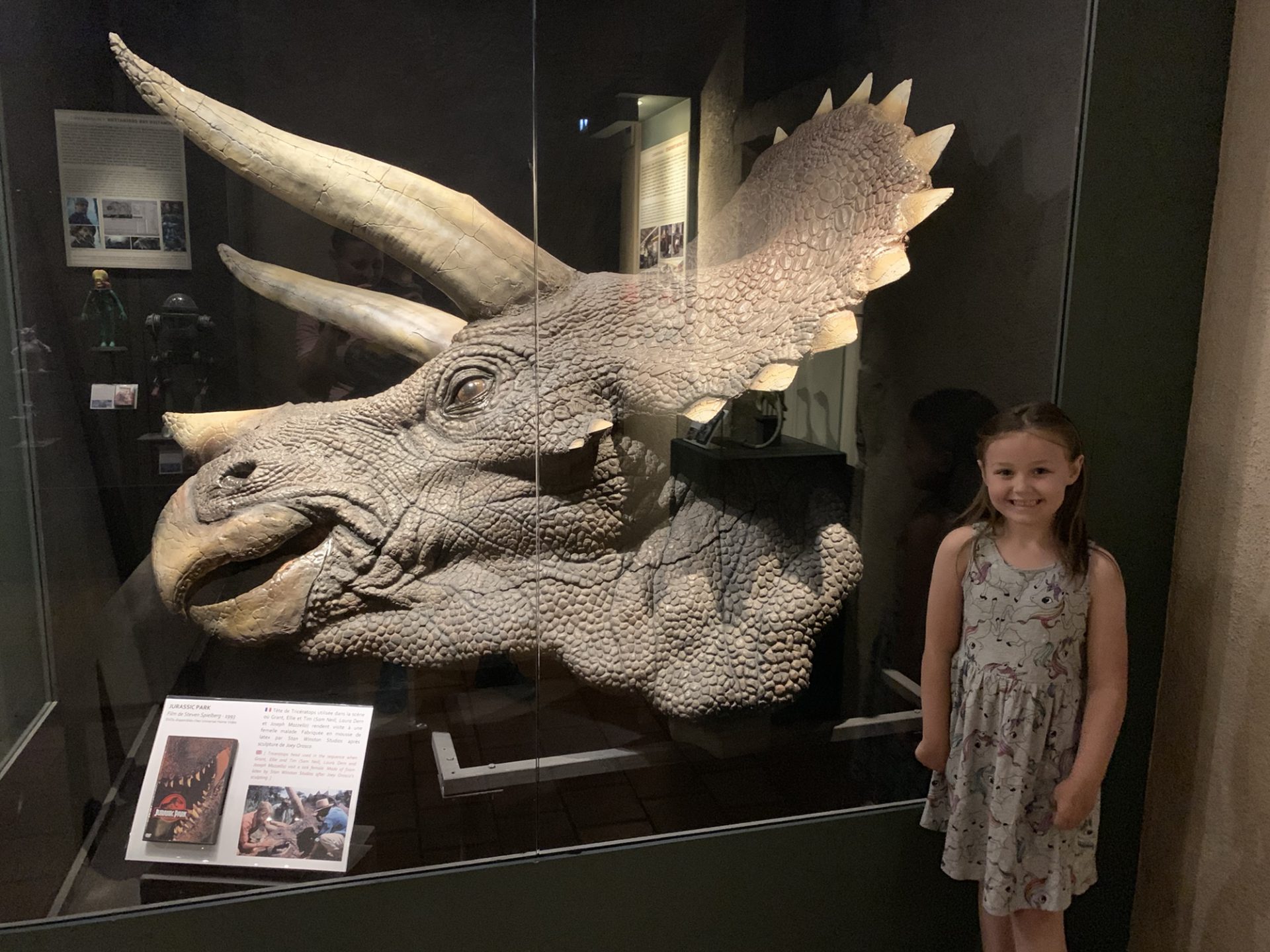 We left l’hippocampe Campsite and headed north to Lyon where we had planned to spend our next week. We stopped on our drive North to take in some of the incredible scenery, the first part of the drive to Lyon was truly beautiful.

The next stop on our route back to Britain was at Le Village de Meuniers, a nice campsite north of Lyon. It was a small campsite compared to some but with several large pitches, great park with trampoline and 3 pools including a nice heated indoor pool.

We spent some time using the pools at the campsite and she finally managed it – Olivia swam on her own, with no aids, and swam three widths of the pool! She’s tried very hard to get better at swimming on this trip and it’s really paid off. She’ll be properly on her way now.

For Father’s Day George chose to head to this strangely out of place museum in Lyon.

The museum contains many props and artefacts from both European and American cinema through the ages. They also restore props and we saw some being worked on.

In addition to the cinema props, there’s also a floor dedicated to miniature world artworks, which were incredibly detailed and created great perspectives.

We were all surprised by the quality of the museum, everyone had their own favourite elements. It was great to see props from movies we’ve loved, and iconic props like the alien queen and Mrs Doubtfire mask.

It was particularly nice for Olivia that there were Stargate props from both the movie and TV show as we’ve been watching it recently and it added great relevance for her, as many of the movies were more adult.

Afterwards, we went walking through Lyon and got crepes, to a great big fountain – which was under maintenance and not working! At least we got to see a couple of the great murals that decorate the city.

Olivia was interested to see some more caves, so we visited this system of caves which have a long prehistoric history.

The main section of caves are still being explored and have a river running through. As well as rainwater pools and waterfalls.

The second section is a higher section which has been dry for thousands of years. Both prehistoric animal skeletons and Jurassic era fossils have been found in there. Primarily the bones are from bears who would hibernate here, but there are also bones and skulls of cave lions that would go there when desperate. The caves were nice, but the audio guide was poor which really detracted from the tour.

There was also a small museum room with some of the artefacts found in the caves including more bones, coins and Roman pottery.

Olivia had wanted to visit a zoo for ages, but whenever we looked they were usually very expensive and didn’t have any animals that we hadn’t already seen. But today we went to Touroparc and were pleasantly surprised by the reasonable price and the animals.

The weather was supposed to be cloudy with a chance of rain, but it actually reached 30 degrees so many of the animals stayed in the shade. But we still managed to see the white tigers, hippos, rhinos, elephants and giraffes who were all visible or roaming around.

The conditions were nice too, many of the enclosures had plenty of space for animals to hide in, even though that is to the detriment of visitors. It also appeared that several of the rarer animals were rescued, rather than bred in captivity or removed from the wild which is always nice to see.

One elephant in particular fell into a dancing circus-type motion for a while, and the other elephant came over to comfort it.

Finally, at the end of the tour, there’s a few rides and games to play, which are all included in the price, so we took advantage to end our day having some fun! Olivia even got some free Magnum sunglasses to go home with!

This was a nice area although it would have been nicer to of been closer to Lyon. We would like to explore more of Lyon when we have more time.