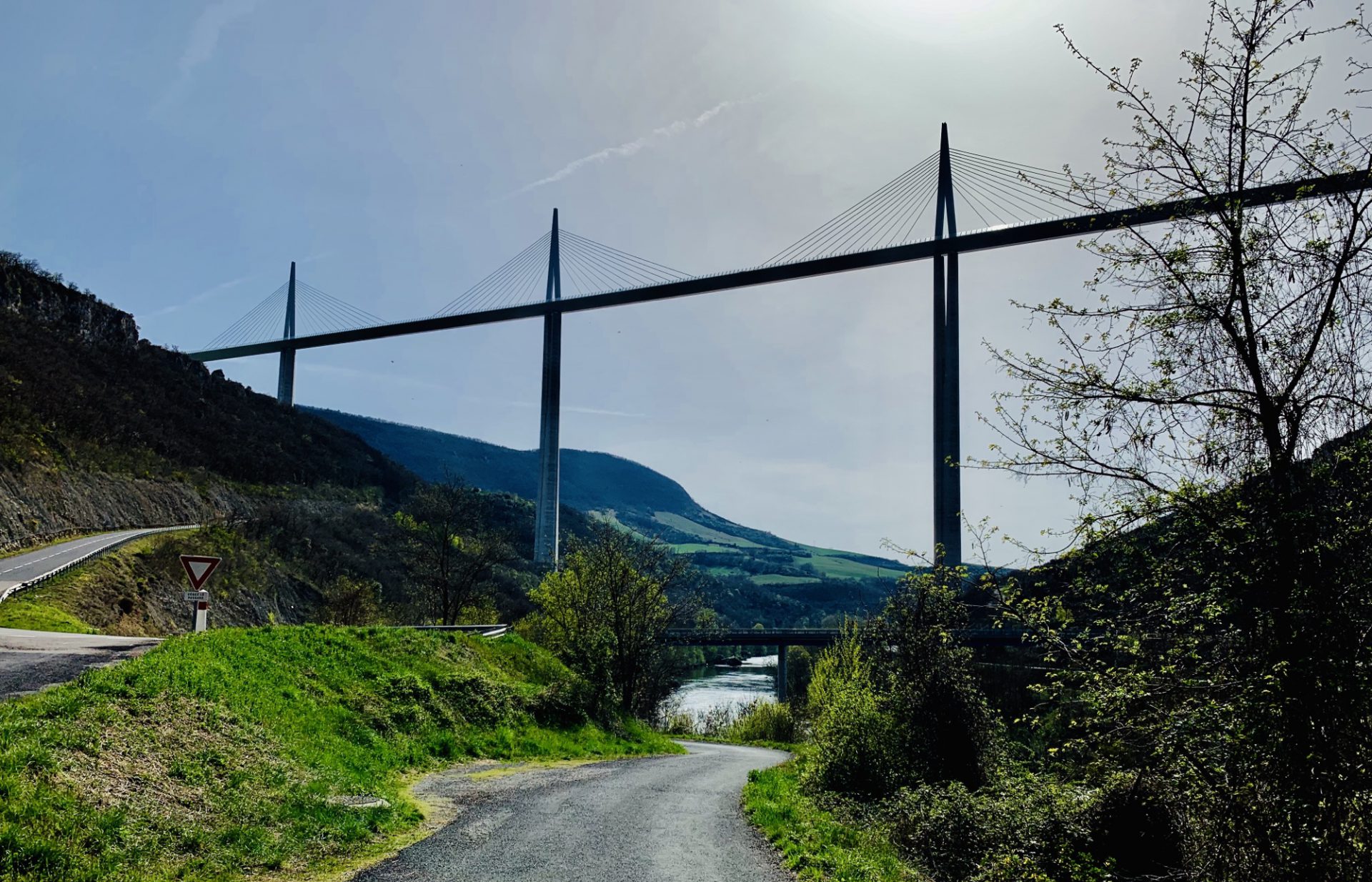 Our trip from Le Puy en Velay to Millau was another surprisingly long travel day! With winding roads going up and down steep hills, progress is a lot slower than a sat nav expects! We averaged about 20mph for over 6 hours.

We stayed at a campsite in Millau called Camping Larribal, pitched on the grass between some trees and just a few metres from the river Tarn.

This site was very much in a high tourist area, with many similar campsites and lots of adventure activity areas. I can imagine in the high season it would be packed and very noisy. The site had some swings and a pool, but like most of the sites in France, the pool was not yet open. Olivia and I spent a couple of hours having a go at a bit of fishing with no luck. The two things the site did have were lots of strange looking and sounding ducks roaming around, and a mass of sticky seed pods falling from the trees all over the car, RV and ground! Several weeks later even after loads of vacuuming, we are still finding them!

The main reason for our stop in Millau was to stop off and see the Millau viaduct on the way to Beziers.

The Millau viaduct is a cable-stayed bridge that spans the gorge valley of the Tarn, and as of November 2018, it was the tallest bridge in the world, having a structural height of 336.4 metres!

We crossed the viaduct on the way to the campsite on one of the windiest days of our trip so far! Unfortunately, it’s was a bit underwhelming to drive across as it has large wind barriers prevent you from seeing down very much (which George was probably actually very grateful for).

We tried some of the wild camping spots around the viaduct, but most of the roads are very narrow, or limited by weight so we were unable to take the RV down them. Crossing the viaduct cost nearly €40 for both vehicles.

Getting a better look

So the day after our arrival we took a drive back up the beautiful mountain road to take a better look at this amazing structure, as well as taking a drive right under the bridge to see how ridiculously high it was! It certainly is a fantastic feat of engineering and wonderful design. However, both Olivia and I preferred the raw metal structure of the Garabit Viaduct we had seen earlier in our trip.

The mountain roads were amazing in the area, there was no way we could resist the urge to take the top down and go for a drive. So with our hats on and Olivia’s legs wrapped in a blanket, we set off out the other side of the town towards the Gorges du Tarn. The road followed the river through the canyon it carved millions of years ago. A great drive along winding roads in the sun through hollowed out arches and glorious rock formations.

After a while, we found a small town and were able to get down to the beach and have a play for a while. Olivia and I braved the water, though I will admit it was so cold I only lasted a few minutes as it physically hurt, while Olivia, of course, spent some time splashing and playing while George and I soaked up the amazing view. We even came across a kaleidoscope of Swallowtail Butterflies.

We stopped at a big park in Millau close to the river for Olivia to play. We were so proud of her as she finally plucked up enough courage and spoke some French to another child and they became friends! Even though they didn’t understand a word each other said they played for a good hour together. It was very nice to see her making friends and having fun as though she were still in Britain.

We only stayed a short while as we really did not like the horrible stick seeds that were getting everywhere. The gorge and river were beautiful, as was the viaduct and it was very clean, but I am not sure I would go back to this area. For me, it was too touristy with lots of adventure activities and not much real sightseeing to be had.

Le Puy en Velay – Buildings on the Shoulders of Giants