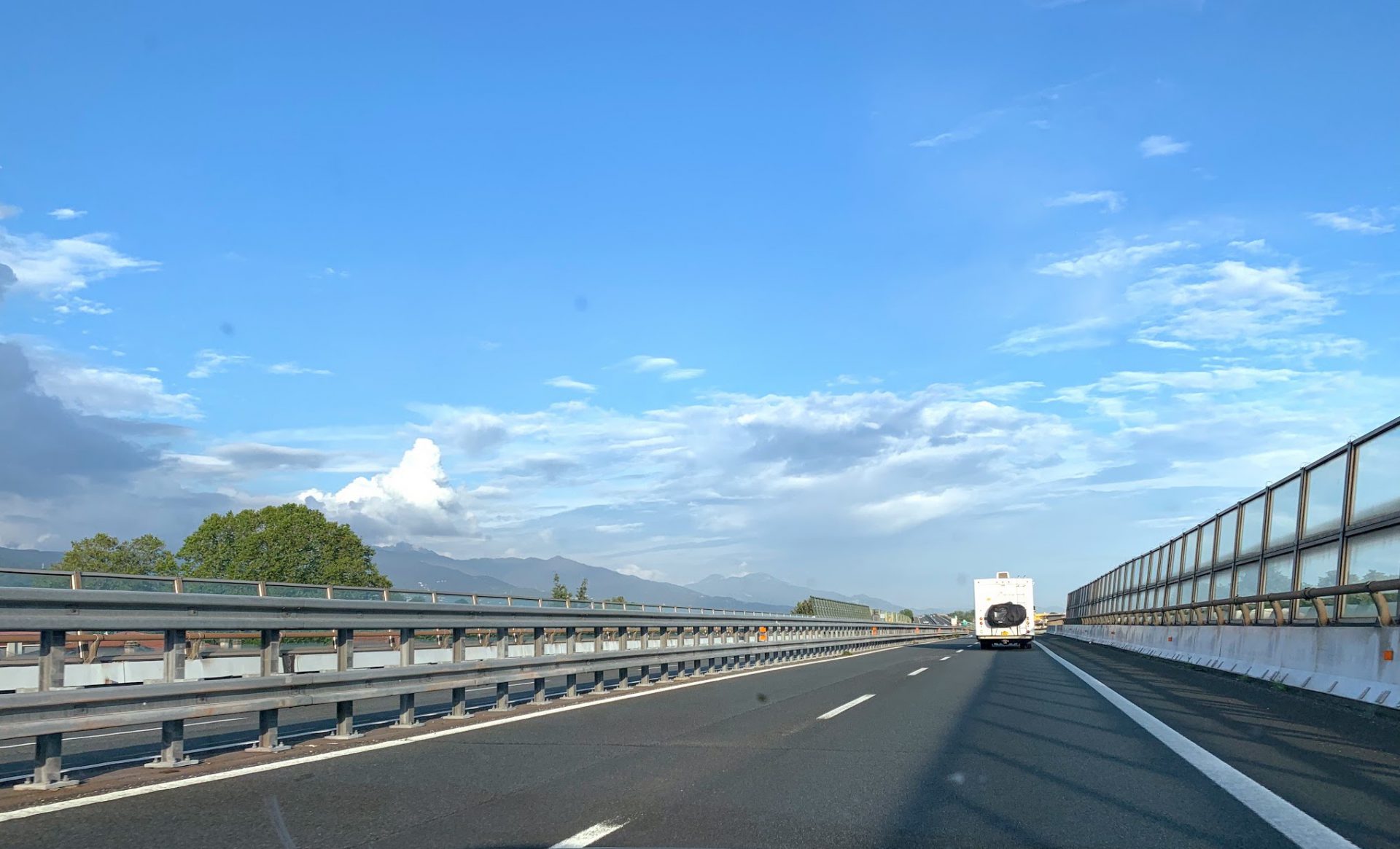 So much has been written about driving in Italy. Italian drivers have just about the worst reputation in Europe, and talking to anyone who has driven there will lead to many, many stories. Unfortunately for us, we wanted to see Pompeii, we have an RV, and there’s only one way to get it there.

Getting in to Italy in the first place

Italy is very mountainous country, especially the north where it joins the rest of Europe. Consequently, the only driving routes involve going up and over mountains, or through them via a network of tunnels.

Because we were coming in from the south of France, we went in via Ventimiglia. This is a sort of 50/50 route which involves going through lots of short tunnels in lots of mountains, without ever really going too steep or spending too long in the dark.

There are some disadvantages to the route though. For no clear reason, the French side of the border has the narrowest toll booths we’ve ever seen. Normally, the far right booths are for lorries, and are extra wide – but not so down here. We managed to fold both of our mirrors in on one booth, and saw plenty of trucks which had similar issues and damaged bodywork from trying to get through!

So you’re in Italy, how’s the Autostrada?

Most of the Autostrada that we used were 2 lanes. With tunnels. Lots of tunnels. On 2 lane roads, there is no HGV overtaking in tunnels. Consequently, just ahead of each tunnel there’s something of a free-for-all where trucks force their way back into the right-hand lane, whether there’s space or not!

The quality of the roads drops a lot too. Even the Autostradas are pockmarked by sunken sections, potholes and ridges that run all the way across the road. You’ll see many a vehicle swerve into the emergency lane, or into any other lane for that matter, to avoid such obstacles. I quickly learned to leave even more of a gap than usual to help me spot what was happening.

Speed limits are rigidly enforced, variable for different vehicle types, and completely ignored by many locals!

The tolls are cheap compared to France, we travelled hundreds of miles and would only have to pay €20-€30 for the RV.

What about the regular roads?

Well, those are interesting.

Italian roads are not well maintained (in our experience). Most of the regular roads we travelled on had serious potholes or other forms of damage. We managed to drive almost all the way to Barco Reale near Pistoria without incident, but the last 10 miles of regular roads had things bouncing out of cupboards and shaking everything to pieces!

Within a few days, I had forgiven everything that I had previously cursed at on French roads!

That said, with all the mountains, and the curving roads leading in and out of them, there’s magical moments a plenty to be had. If you enjoy that sort of scenery (and we do) then you’ll be spoilt for choice and running out of camera storage in no time.

Are the drivers really maniacs?

Depends on what you’re used to! We said that driving in France was good training for Italy. If we’d been transplanted straight from Britain then it would have been far more daunting!

There’s plenty of tailgating, some inconsiderate parking, and some general disregard for the rules. But it works, everyone is doing the same craziness, generally watching for other drivers actions and they are pretty prepared for you to make mistakes. Road rage isn’t much of a thing, as every driver has their own share of mistakes to be forgiven.

Tailgating was my main concern, whether in the car or the RV. Many drivers will tailgate no matter what the speed limit or whether your breaking it!

That being said, driving in cities when it’s busy is a different kettle of fish. One of the bad things about our route was that we had to go through Genoa. In August 2018, the Morandi bridge tragically collapsed, killing 43 people. Since then, the Autostrada has been diverted, but our GPS took us through the city itself.

Driving through Genoa in the RV was about as scary as our trip through Italy got. An entire motorway was suddenly shoved into rush hour traffic, with roads that have 4 lanes that split in multiple directions. Scooters trying to get between the side of the RV and a concrete wall while travelling at speed. Drivers who are in the wrong lane forcing their way across.

Though to be fair, we were part of that latter group. Italy doesn’t seem to be big on road signs, and certainly not big road signs! Despite having both sat navs running, we managed to wrong lane ourselves several times, but that ability to be forgiven let us safely through the city, and out the other side. Twice, as we did it on the way back too!

Would we go back?

Definitely. There’s plenty more for us to see in Italy.

We’ll stick to the major roads for the RV, and pick campsites which aren’t too far away from them for convenience. We’ll also make sure we bring a car with plenty of suspension travel and bouncy tyres too! I’ll admit that we chickened out of driving the RV from Rome to Pompeii, and drove down in the car but that was more of an issue with finding campsites than anything. There’s also a ZTL restriction in Pompeii for vehicles over 7m which has an €88 per day charge!

LPG was well priced in Italy, and available in plenty of places, though it became much harder to find between Genoa and Ventimiglia. Petrol was expensive, especially the super unleaded (98 RON or more) which we saw as high as €2.02 per litre! Diesel is about €0.10 per litre cheaper than any petrol from what we could see.