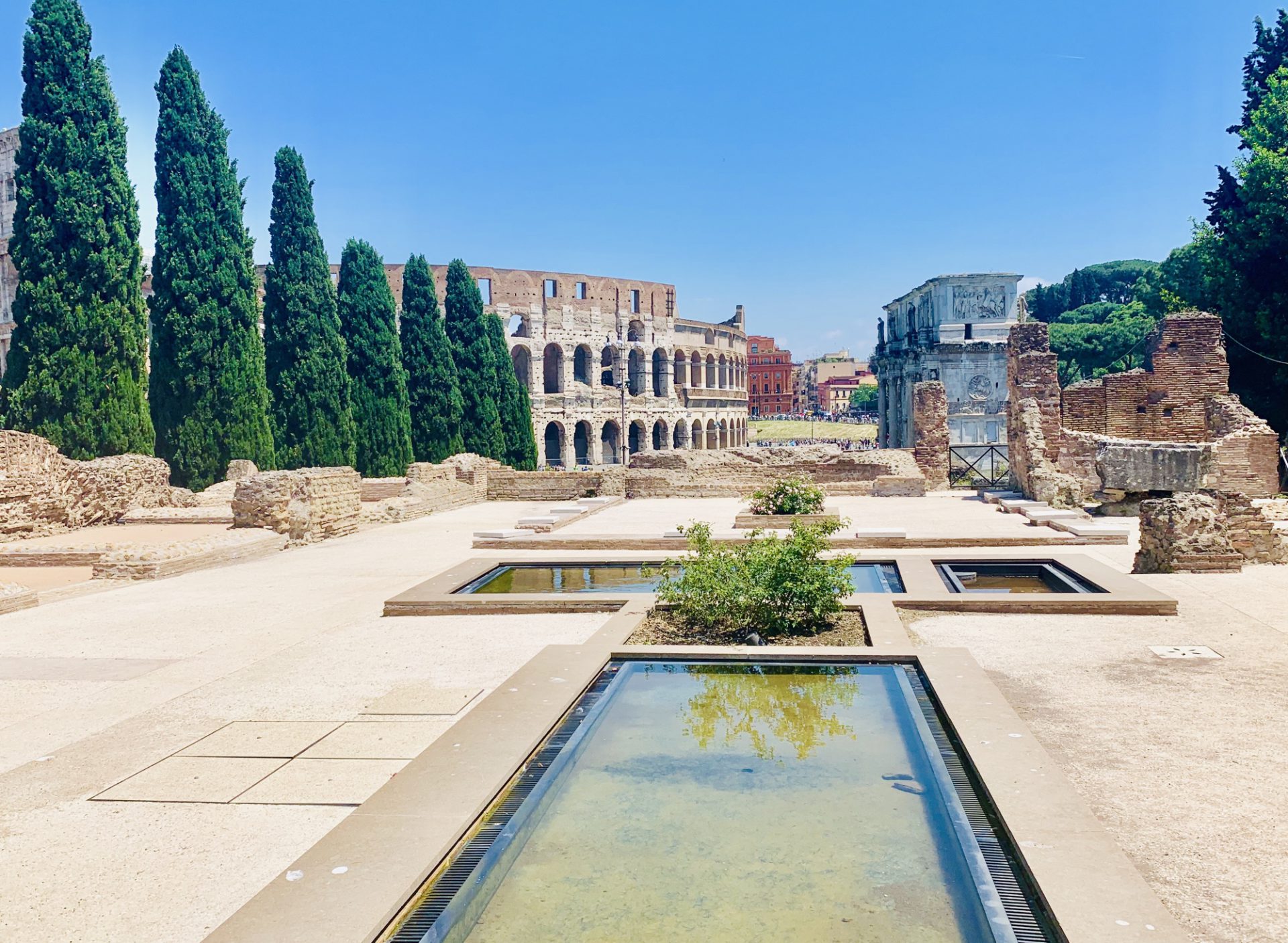 The next stop on our adventure was Rome. Our travel day was easy on the autostrada and led us to Area Camper Club Mira Lago Roma. We already knew from Florence and Pisa how expensive it is to visit places in Italy and how busy they get. We were eager to start our visit but wanted to be more prepared for Rome, so we booked ourselves a walking tour for the very next day and arranged our trips for the rest of the week to the Colosseum and Vatican.

Camper Club Mira Lago Roma in Lunghezza was a nice site. Although it’s a little noisy, so not really a site for relaxing on, but worked out well for us with all our sightseeing. There was a little park and the owners have children who Olivia enjoyed playing with. They also had a kitten which Olivia fell in love with. I did a spot of fishing on the ponds next to the site and although I did not catch, it was a nice few hours break on my own.

We had booked ourselves on Rome’s Ultimate Free Walking Tour. We weren’t sure what to expect – but it was free so we could always drop out. Other tours were €50+ per person and we didn’t want to pay that and then feel disappointed!

We decided we would use the sites free shuttle service to the nearby station and take the train into Rome. We tried to arrive early, but the train and subway systems, while cheap, were not fast and it took much longer to reach Porto al Popolo than we expected. Though we still managed to get a nice lunch in before the tour started.

29 people showed up for the tour, so we were split into two smaller groups which was a great start. Our guide, Jobe, was an American who’s been based out of Rome for the last 20 years. He was really full of life and enthusiasm for this city. He led our group of 14 and gave us some of the backstreet histories of the city. The tour was very interesting, taking in some of the places we most wanted to see like Piazza Navona and the Pantheon. As well as stopping for gelato and learning that the river used to flood – and at one point flooded to a height of 19.56 metres above sea level!

Jobe was a great guide with so much knowledge of Rome and Roman history. He also taught us how to act like a Roman; by walking fast, merging in large crowds to avoid the queues; crossing busy roads with confidence and schmoozing the staff in the gelato shop by saying “Ciao Bello” (hello handsome). Though it was a whistle-stop tour of some of the busiest spots, we still ended up taking an hour longer than the tour normally takes for additional stories and chatting afterwards.

We loved this tour and we loved Jobe. Although at times Olivia was a little bored, she enjoyed the tour. At times even whispering additional information to me that she already knew about the places we were visiting and the people we were learning about. She also took the information we learnt and used it on our other trips into Rome. If we had more time in Rome we would join him on some of the other tours.

The Vatican seemed like a really good idea, but it was not!

We’d intended to drove into Rome and then take the metro to as close to the Vatican as possible. We couldn’t park at the metro station however as all the car parks were full. Eventually, we ended up parking quite close to the entrance of the Vatican itself in a surprisingly cheap car park.

We ate before the tour and watched the long, long lines of people waiting to purchase tickets. Fortunately, we had booked ourselves on to an afternoon Official Vatican Tour. We’d read that was meant to be one of the quieter times to visit. Thankfully, the tour came with skip the line tickets, and so we dutifully bypassed most of the people, went through security and got our radios etc for the tour. It was very busy and loud inside, and too much for Olivia until she put on her ear defenders. Thankfully the one piece earphones fitted under them and she was happy.

The tour started well, with an outdoor talk about the Sistine Chapel, as there’s no talking in the chapel. When and how it was made, who painted it, what was depicted in each fresco and when etc. It was a good talk, but it was all downhill from there.

Once the talk was over we headed in with everyone else to the museum itself. The museum is filled beyond belief with statues, paintings and other types of art. But almost none of it is visible due to the huge crowd that is ushered through the halls on a predetermined route.

Our tour quickly dissolved into a long spread out line of people. So long that at the back the radios gave out, as the jostling crowd pushed and shoved their way along. Poor Olivia got bags and elbows to the face! To start with I was forgiving, but as it got worse and Olivia was almost completely knocked over I became an angry protective mum! Elbowing back and even at one point yelling at people who pushed me or Olivia. I felt like I was in a mosh pit rather than a museum! The crowds are so severe that a guard interrupted our tour guide and told her to move along the one time she stopped to talk about a particularly interesting piece!

Finally, our guide left us to make our own way to the Sistine Chapel, a place of silence apparently. Well, the guards aren’t silent as they herd hundreds of people into the chapel and out the back. The frescos and the works of Michelangelo were stunning and beautiful for the several minutes we were gifted to see them.

To top it off this terrible experience cost us €90!

My advice on visiting is don’t waste your money. You will see far more from books and on the internet than you will there. If you really want to go, really consider what it is you want to see. Consider booking a private tour and plan in advance with them what you want to see. Make sure you book well in advance and do not take children.

We were very excited to see the Colosseum, especially after our trip to the Nimes amphitheatre, and had booked a video guided tour.

On the first impression, the Colosseum really lives up to its namesake. At 50m high and over 150m wide, the Nimes Amphitheater would fit in sideways and still be invisible to the outside world!

It really is a monumental feat of architecture, a colossal sight and shows you just how amazing the Romans were. This huge stone structure was built to hold more than 50,000 spectators who’d witness bloody contests of might, and the slaughter of wild beasts which would have been amazing and shocking all at the same time.

It was interesting to see people working on the site, renovating and preserving this magnificent place. Though it was disappointing to have so much of the floor covered in scaffolding and tarpaulins. The underground corridors that were visible looked impressive and very complex. It would have been good to of gained access to them on one of the underground tours, unfortunately, tickets were not available during our visit.

Compared to the Nimes arena, the Colosseum is in a poor state, though they are still working on its restoration. The video made it easier to imagine how the seats and arcades worked, as it’s difficult to see from the ruins alone.

I think we are all in agreement that we are very glad we visited and it is an amazing place but we all preferred Nimes Amphitheater!

If visiting I would suggest booking tickets weeks in advance so you have more choice of tours and ensure you wear cool clothes, hats and take plenty of water.

After the Colosseum, we walked up into the Forum and toward Palatine Hill. The entrance ticket of which was included with our tickets to the Colosseum.

Unfortunately, with the long train ride to and from Rome, we had much less time than we needed to really view the site. It was also an extremely hot day and there is very little shade. So we took the decision to just walk up the hill and view the ruins from above. It was incredible to see from high up just how many buildings were there, and how amazing the site must have been in its heyday.

Rome is an amazing city and we would have loved to have spent lots more time there. It’s certainly somewhere we would love to return. We would not recommend going to the Vatican, and really wished we had spent that time and money on something else. You need to make sure you book tours well in advance. If the weather is going to be hot, ensure you take an umbrella for shade and plenty of water.