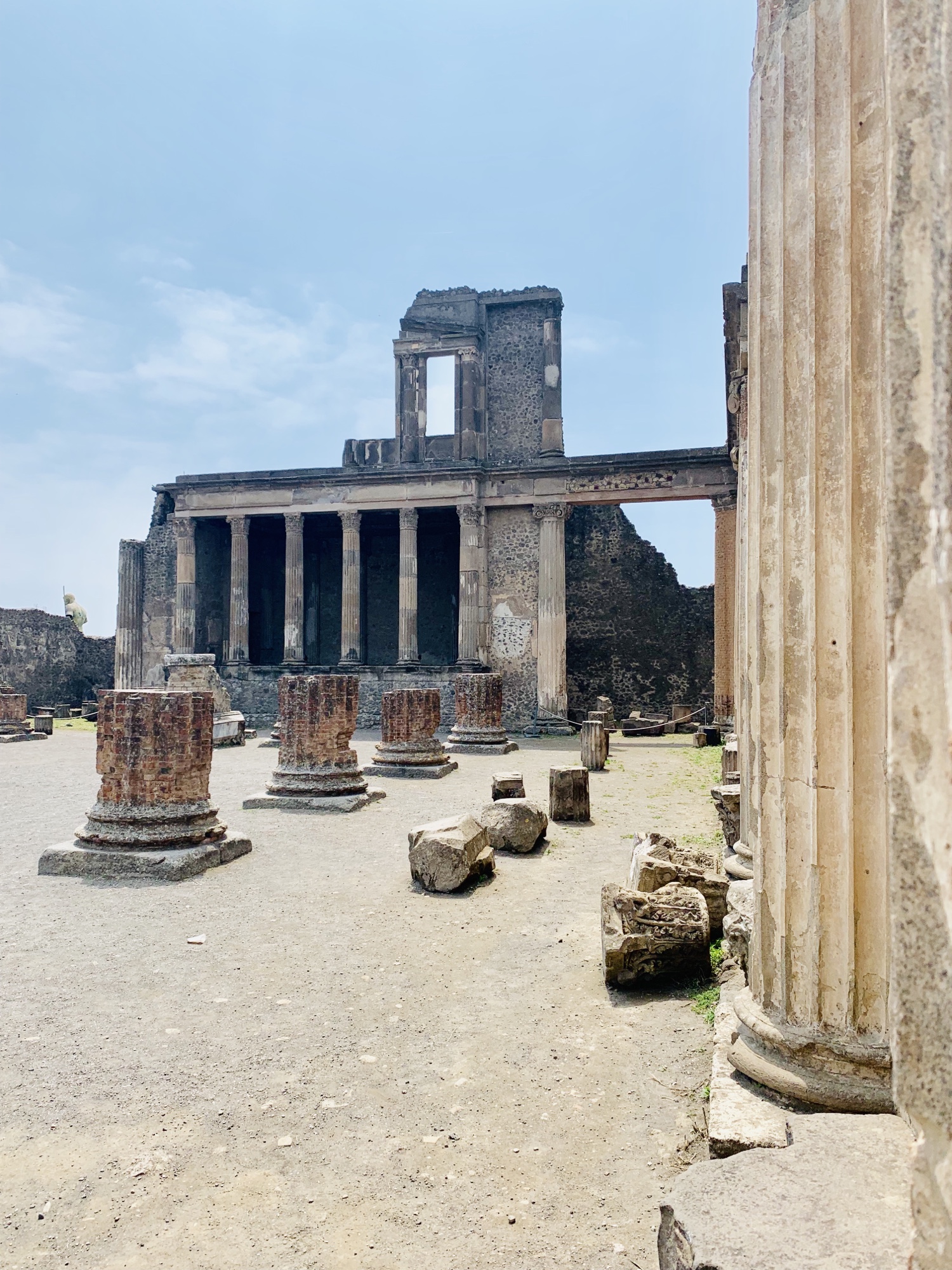 That’s right poor Harvey the RV got cheated on and left behind in Rome, while we made our trip to Pompeii and spent two nights in a Hotel. Olivia has wanted to visit Pompeii since learning about it a few years ago. It was one of the first places she asked to go when we first considered travelling in Europe, and it’s one of the main reasons we’ve travelled to Italy.

We couldn’t find a suitable campsite, and to drive the RV into Pompeii itself would have cost us a fortune due to a ZTL length restriction. So we left the RV in Rome and booked a short hotel stay near the archaeological site.

The hotel was nice, clean, dog-friendly and if the weather had been clear we would have had a good view of Mount Vesuvius. We were not overly impressed with the restaurant and had the worst cannelloni of our lives. But it was a perfect location for our visit to the archaeological site and Mount Vesuvius.

We were glad to get back to our home (the RV) and sleep in our own beds.

After how busy the other places in Italy had been, and the success of our walking tour in Rome we pre-booked a small group tour suitable for kids with Italy Tours for Kids. It turned out to be a private tour as we were the only booking!

Our guide Roberta introduced herself and took us to the marine gate where we would enter the site. Roberta gave Olivia a bag with a map and information about the site and asked Olivia what she knew about Pompeii. At this stage, Olivia was very quiet and shy about responding, but Roberta crouched down and talked her through the map and reminded her of the famous eruption. After this Olivia was much more relaxed and able to enjoy the day.

She then collected the tickets and took us in through the marine gate, which used to be a sea wall until Vesuvius did its thing in 79ad. She explained that the site was buried in 21 feet of ash and the sea was pushed back nearly 2km from the city!

The tour was very interesting, and it was great to see the parts of the city that have been excavated. It’s clear that if you weren’t a slave, you probably had a much better life in ancient Pompeii than people in the 15th or 16th century. In fact, it was surprising just how similar Pompeii was to Oradour sur Glane, with rows of former homes and shops, street food vendors and city bakeries making up the bulk of the remains.

The practicality of the city was impressive too, with fountain runoff being used to clean the streets, and high pavements and raised zebra crossing like stepping stones used to keep the citizen’s feet dry!

Keep it interesting with some games and activities

Throughout the tour Roberta was able to keep all of us engaged and help us understand how living in this amazing city would have been. She used flash cards of gods and goddesses to help Olivia recognise which temples and signs were for which gods. She introduced plastic food to help discuss how the shops would have served food like street vendors today and to identify what types of food would have been available back then. Also how to identify shops from houses, poor houses from rich and explained how the bakers would have worked. She even took us inside a bathhouse and explained how the men and women had different baths, how the walls were heated and that the bored servants had even carved graffiti into the walls.

After checking it was ok with us and that Olivia would be fine, Roberta took us to a section that holds some of the finds from the excavations as well as a few casts in glass containers. It was amazing and emotional to see just how detailed the casts were. You could almost see expressions on some of their faces.

We ended our tour at the theatre, where we found out that actors were not particularly well respected, despite the popularity of comedies and dramas with the local people.

After Roberta left we continued to look around for a little while, as well as get ice creams and amazing lemon slush as it was so hot. We took a walk around the small museum where they have some original casts and items found as well as a model of what Pompeii would have looked like.

On the way out we saw some archaeologists working on more areas that are being excavated. Olivia thought that watching them work was amazing.

Unfortunately, the whole day Vesuvius was hiding from us under a blanket of cloud and you could only just make out a faint shape.

Pompeii was an amazing place, and we’re glad that we had a guide to show us around. Together with her information and the other Roman structures we have visited on this trip, we were really able to imagine just what it would have been like to have lived here. It also made us realise how sad it was that we had the dark ages, losing so much progression, amazing skills, engineering brilliance and architecture.

We had sort of seen Mount Vesuvius from Pompeii the previous day, but it was shrouded in mist. So we only got our first real look as we approached the mountain for our ascent.

We drove up most of the way, on steep, winding roads to a parking area. There, a dog-friendly shuttle bus took us further up to the ticket area. After mixing with all the coaches, we then walked up to the base of the trail, collected some free walking sticks and started the climb.

The climb zigzags its way up to the crater. Regular rockfalls make the path surface loose and it’s easy to lose your footing. It’s steep too, about 10% gradient, with a few places to stop and rest early on, but the last section is all walking.

At the top, there’s a shop where we bought some nice cold drinks as we had used up most of our water. There’s also a place where you can hire a personal guide if you want one. We decided to go it alone and walk further round until we reached the final shop, la capannucia, at 1,167m above sea level. Here we purchased a postcard which they stamped to prove we had made it to the top!

View from the top

Compared to the Puy de Dome, Vesuvius feels like a real volcano. Having erupted 50 times since it buried Pompeii, it’s still quite active. That’s made evident from the jagged, deep crater and the rock that makes up the top few hundred meters of the crest. The types of rock were quite varied, even in the crater itself, with volcanic rock everywhere, as well as mineral rocks and something we couldn’t make out at all.

Olivia was delighted that we were standing on top of a live Volcano. A great accomplishment and something we will never forget.

The view of Pompeii is difficult, and not signposted in any way – it would have been nice to look upon the archaeological dig from the place that destroyed it. We think we just about worked out where it was using google maps and it’s further from Pompeii than you would expect. However, the view was stunning as you can imagine.

Descending should be simple

The walk down is not as difficult as the walk up, but it’s certainly more dangerous! With all of us slipping on the loose rock, and the odd fall, it was difficult going for us and the other walkers. But as a huge, constant stream of people continued surging up the mountain from the coach tours below, it wasn’t putting anyone off.

A well deserved ice cream at the bottom of the climb was needed, and we got our first sunburns of the trip, but we all felt triumphant that we’d conquered the climb and peered into a real volcano!

The whole trip to Pompeii was fantastic. There had been moments where I thought we would not make Pompeii. We had even discussed not heading so far south due to lack of time and campsites. I am so glad that we pushed on, even if it was a bit of a rush because it really was one of the highlights of our trip. Reaching Pompeii, seeing the archaeological site and climbing Mount Vesuvius was the main goal of this trip and it really did not disappoint. If you have ever wanted to go, just do it, it’s awesome.

You have beautiful images here of Pompeii. May I reuse these (with attribution and link to this blog post) for a small, amateur, non-monetized documentary video? We are trying to share the story of Pompeii and your images are few of the best ones I’ve found so far.
I will not include any images that have your family. Please let me know as soon as you are able as we want to release the video tomorrow and I am a last-minute editor. Thanks! 🙂