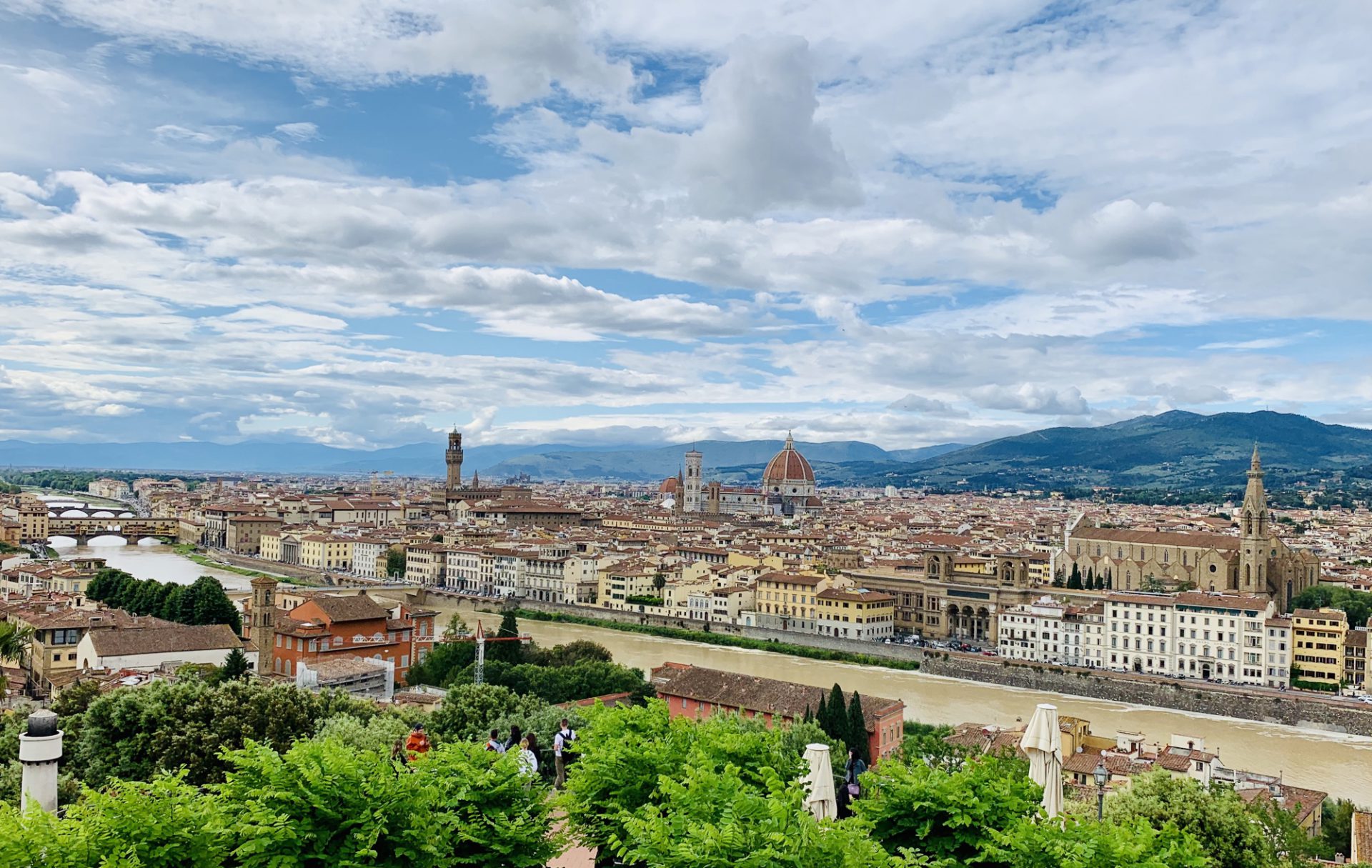 We decided that if we were going to reach Italy and venture south to Pompeii on this trip we really needed to make the move. So we decided to make a leap of 409 miles and it worked out pretty well.

We emptied the tanks and left Camping Fontisson at around 10 am and headed straight for the border. Of course, we needed to fill up with LPG but we decided the motorway services would be fine for that – but France surprised us again with height restrictions at all of the pumps! With my broken French and good old Google Translate, I eventually convinced an attendant to guide us in through the exit so we could reach a pump and fill up.

After that, we headed for the border once more, through ever-tightening peage stations that folded our RV mirrors in and caught out more than a few truckers as well. George wasn’t so happy about having to drive to a parking area with no mirrors, so maybe a camera backup will be added shortly?

We finally climbed into Italy through seemingly endless tunnels and bridges and settled onto the Autostrada. Things went well but we had to deviate through part of Genoa city, which gave us a true taste of Italian driving. While George in the RV could throw his weight around, in the BMW I just had to swallow some brave pills and go for it!

After that the remaining Autostrada was fine, and the last 20 miles to the campsite was bumpy but doable. The final challenge was scaling a hill with endless hairpins and tight corners, and very tight roads with parked vehicles – but we finally made it! In the dark! And managed to get set up on a pitch.

The Barco Reale campsite was lovely, it is located on the top of a mountain, which took 10 minutes to drive from the bottom to the campsite through very narrow winding roads.

It was a big site but did not feel it as it was spread out over different levels and mixed in amongst the trees. There were amazing views of the town below and lots of wildlife.

The site had three lovely pools which we made some use of. Italy requires people to wear swimming hats, which were available at reception.

There was a lovely restaurant on site, owned by an expat English couple who were very welcoming and served wonderful home cooked food.

The local area of Lamporecchio was filled with tree and plant farms. Not something I ever really considered existed. But there was farm after farm of ornamental trees, large fir trees, the types of trees you would see outside British garden centres – it was amazing.

We took the new Pisamover park and ride service into Pisa which made the driving much easier. Unfortunately, it gets into Pisa about a mile from the square of miracles so we were left with quite a walk.

When we finally arrived, the two things that were most surprising were just how much the tower leans and how short it is!

It’s also a very busy place with hundreds of people all simultaneously trying to pose in ‘holding up the tower’ positions – so we joined in!

Alongside the tower, there is the cathedral, baptistery and cemetery. We were able to get a late entrance to the cathedral which is elaborately decorated and filled with paintings. The ceilings, in particular, are very ornate and have many beautiful paintings on them.

We didn’t climb the tower – it seemed too expensive at €18 each plus Olivia was not old enough to go in and it was late – but we’re glad we came and played in the square.

We decided to use the hop on/hop off bus tour to get an idea of the city, but this was a mistake, it was expensive, difficult to find the location of the stops and unlike say, London, the bus can’t drive past anything interesting and you have to walk anyway! It did keep the worst of the rain off though.

Once we walked into the old town though, Florence was a sight to behold. Every corner seemed to reveal a new sight, and the cathedral and baptistery looked like they were paintings rather than actual buildings, so delicate are the colours and elaborate the design. The queue to enter the cathedral was also something to behold too, so we continued through the city.

We eventually made it to a Da Vinci museum – not the proper one, but a dodgy one set up close by to lure in us tourists! But it was good, it had nice models, and a big workshop area where Olivia could try out some of the concepts of Da Vinci and others, as well as mirror writing and a spot of bridge building.

We returned to Florence so that we could visit the Galileo museum and tour more of the city. We walked along the river until we reached the Ponte Vecchio, an ancient bridge crossing the Arno which now houses a large number of very expensive jewellery stores.

When the Medici moved from Palazzo Vecchio to Palazzo Pitti, they decided they needed a connecting route from the Uffizi to the Palazzo Pitti on the other side of the Arno that would enable them to keep out of contact with the people they ruled. The result was the Corridoio Vasariano, built in 1565 by Giorgio Vasari and which runs above the little goldsmiths’ shops on the Ponte Vecchio.

Olivia was delighted to see the private passageway across the top which allowed the rich families of Florence to cross from one side of the river to the other without mixing with the poor people. The bridge is a busy place, with nice views of the river from the middle and a fountain-monument to Benvenuto Cellini which Olivia threw a coin into and made a wish.

From there we went to the Galileo museum, which isn’t really about Galileo, it’s just named that way to bring in tourists! The museum is actually a huge collection of scientific instruments, a few of which did belong to Galileo. Olivia found some bits on the museum interesting but after a while just got fed up and wished there was more interactivity. We rushed the rest of the museum from there, stopping to see Galileo’s Finger and Telescopes.

After lunch, we walked up to the Piazzale Michelangelo, a large square with a great view over Florence. Halfway up we stopped at a Rose Garden, Olivia enjoyed exploring the garden and looking a the sculptures and artwork dotted around. We continued to the top of the steep stairs, grabbed a scoop or two of gelato and admired the view from another set of stairs while birds tried to get scraps of food from us and a street musician played in the background.

The view from the square is quite strange, but totally stunning, with the regular buildings absolutely dwarfed by the giant Cathedral, Basilica etc. The town appears flattened like a map, with pop up buildings placed on it.

We were not ready or organised enough for Italy, for Pisa or Florence. We did not expect the monuments to be so expensive to get into or just so busy. With more time, more organisation on our part and maybe some planned tours, Florence would be a delight that we could spend days in. We were not the only ones not making the most of it, there was a most disappointed tourist in Florence looking for the leaning tower of Pisa! Olivia found all the walking around just looking at the outside of builds rather boring. She loved the Rose garden, the Leonardo Da Vinci Museum and splashing in all the puddles around Florence. We also loved some of the random art we found around the city.

We are enjoying your blog from Idaho, USA. Hoping to do the same trip someday soon. My daughter just left Florence a month ago, so it was fun to see some of the same pictures. Hope you managed to squeeze in some gelato!

Thank you for your lovely comment, I am glad you are enjoying our blog. We did indeed manage quite a lot of gelato! We would love to tour America someday but it is difficult to get visas.

I’m so sorry but I was unable to find prices of the camping sites.

Thanks for your comment, we hope you’re enjoying the blog.

Sorry, but we haven’t included pricing for campsites as each site generally has quite complex tariffs. For example, at Barco Reale, they have 6 different types of pitch, and they charge on top of that per adult, child, pet, additional car, wifi etc. If we try to include all of the details then it will get very complex, and will quickly go out of date.

If you think it would help, we could start putting an overall cost that we paid, and indicate if a site includes discounts for ACSI card etc. But we think it’s still best to estimate your price on the campsites own website or by calling them direct.

Hopefully in a few more years, we will once again return to being a welcoming country to visit.

It’s not so much a welcoming issue for us, just that entry tourist visas (for UK citizens) are limited to 3 months by default, and you have to leave for a while before you can re-enter. Too many re-entries can also be frowned upon.

At the moment our best plan is to come over, buy and register an RV through an LLC, and then tour for 3 months, store the RV, return to the UK and work for another 3 months, go back out to the US and take the RV out of storage, and repeat. However, it’s a big step as we’d need to find the funds for all the flying and managing an RV in the US as well as a place to stay in the UK.