Fueling and Fitting – A guide to HGVs on the car pumps 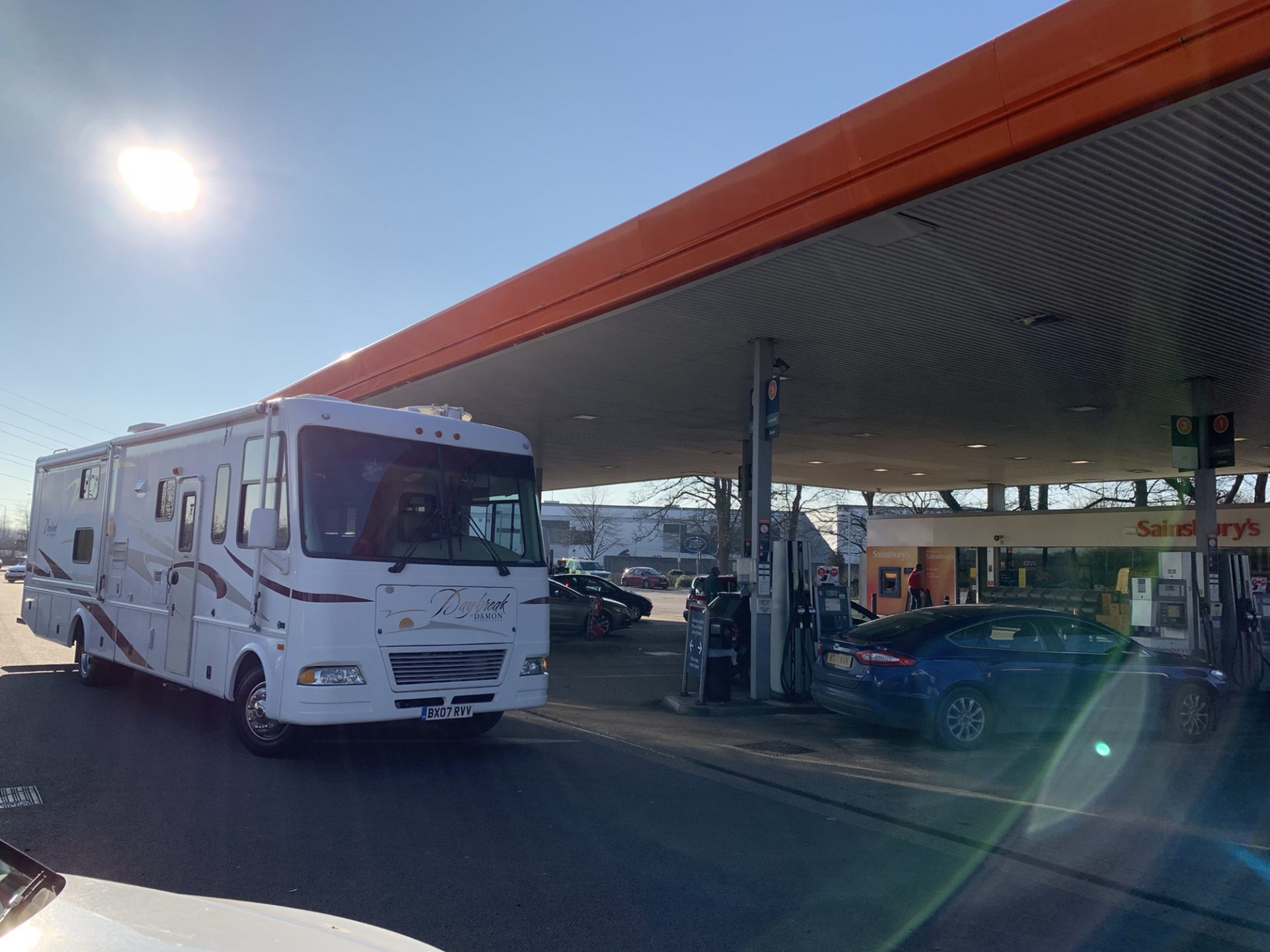 Fuel. Fuel is pretty important to a motorhome. Without it, you’re basically in a very unstable shed. With fuel, the world is your oyster, you can go anywhere and see anything

The problem with petrol and LPG in the UK is that HGV filling stations don’t stock it. The only fuel that you’ll find in an HGV station is diesel, and that means we have to try and get Harvey onto a regular car pump every time we need fuel.

There is one major choice when you buy an American RV, and it splits opinions right down the middle. The choice is about fuel, do you go for petrol or diesel? Now there’s a lot of debate about which is best. Rear-engined are quieter, more powerful, more economical. They ride better with air suspension and stop better with air brakes. They also cost a lot more money. On the other hand, petrol is noisier, slower and less economical. Most of this debate happens in the US where it’s more relevant.

When it comes to driving in the UK, a third fuel becomes an option, LPG. LPG solves one of the major petrol issues – . In the UK, LPG is taxed very lightly costing 50-60% less than petrol. For a while, it was very popular to convert cars, and garages started to stock LPG. There’s usually a single pump somewhere on a very big forecourt, or at out of the way garages. One of the things you can almost guarantee though is that there are no HGVs available that run on it.

Filling up is all about planning

If you live in the UK, you know that petrol is incredibly expensive. When Harvey was built, fuel in the US was about 49p per litre. At the same time in the UK it was £1.04 per litre! Consequently, the art of finding a well priced petrol station is as much a part of driving as forgetting to indicate at mini roundabouts.

Adding LPG into the mix makes things even more fun. Not many fuel stations stock LPG in the UK. An excellent way to find an LPG station is to use a site like Fill LPG, which lists most stations. Crucially, Fill LPG also has crowd-sourced pricing on its site; so you can see how much an individual station is charging. If you then compare the map to your expected routes, you can find the best places to fill up.

The trouble is that Harvey is 11.5 metres long and 3.7 metres tall. A fuel station that we can use needs to have good height clearance, long, straight pump entrances and a decent exit. To make matters worse, our fuel tank is on the left at the front of the RV – but our cooking tank is at the back on the right. When you find a station you can fill up at, you need to take the opportunity to do both tanks. How do you know if you can do that from a map?

Street view to the rescue

Once you’ve found your possible stations, the next step is to visit them in the virtual world of Street view. Starting with the station itself, you need to identify the LPG pump, and then work out if you can even get to it. This station we considered has only an LPG tank and a pump in the corner, it would be impossible to get the hose to our fuel tank.

If you’re sure you can get onto and off of the pump safely, it’s time to consider the route. Start moving along the roads leading to the station, look for obstructions and tight turns. If you can easily get to a major road, great! If not, maybe consider other options.

Even then, it can all go wrong

One of our first trips to get LPG was when we ran low on cooking fuel at Tanner Farm Park. We looked at all of the stations in the immediate area and decided the only option was to drive many miles to a big station.

While the station itself was great, the route we took to get there was not! Trying to navigate down tiny country lanes in the name of fuel was not fun at all. It also started us on a hunt for a new sat nav!

Once you get to the station, you’ll have to consider being inconsiderate

OK, you’ve chosen the station, plotted the route and successfully driven there – now what? Well, chances are that any decent station will be busy, so you’re going to have to queue. Queueing wouldn’t be so bad, but unlike all of the cars around you, you’re looking for just one pump, and you’ve got to wait for it to become free.

While you’re queueing, you need to plan. You need space to swing wide, that short wheelbase and giant rear-end is an easy way to clip a car or pump, in fact, it’s one of the most common RV accidents in the USA.

The only way to safely get yourself and the RV through the pumps is to just sit and block whatever you need to until you can get where you need to be. The best way to do that is to get your spotter to help redirect traffic around you.

Once you’re on the pump, don’t forget that most pumps have a cost/volume limit – so you might need to go in and pay multiple times on one fill! Oh, and LPG fills at a really slow rate, so you’ll be blocking that pump for a really long time!

Finally, you’ll need your spotter to get out and block traffic while you maneuver round to fill the other tank. Sometimes this is easy, just pull back and go the other side of the pump. Sometimes it’s not so easy, pull forwards, 3 point turn, drive the wrong way onto the pumps, then reverse off when done again.

Is it worth all that hassle?

Harvey is getting about 8-9mpg at the moment. That’s calculating litres of fuel used vs actual mileage, not using the computer figures. That seems pretty terrible, and at £1.20 per litre of petrol, it would be! But at 60p per litre of LPG, it’s the equivalent of 16-18mpg, with the cheapest stations pushing that beyond 20. Over 8,000 miles that’s a saving of almost £3,000 and that’s worth doing some research! We’re also told that in the EU it’s a little easier to find stations, but we won’t really know until we get there.

If you’re not interested in the effort, then that petrol vs diesel debate gets a lot simpler. Diesel RVs can pull straight onto an HGV pump, fill their massive tanks in double quick time and be on their way. 100% simpler.

Pet Passport for Pepper and Travelling with a Pet