Our New/Old RV – Weren’t we getting a Fifth Wheel? 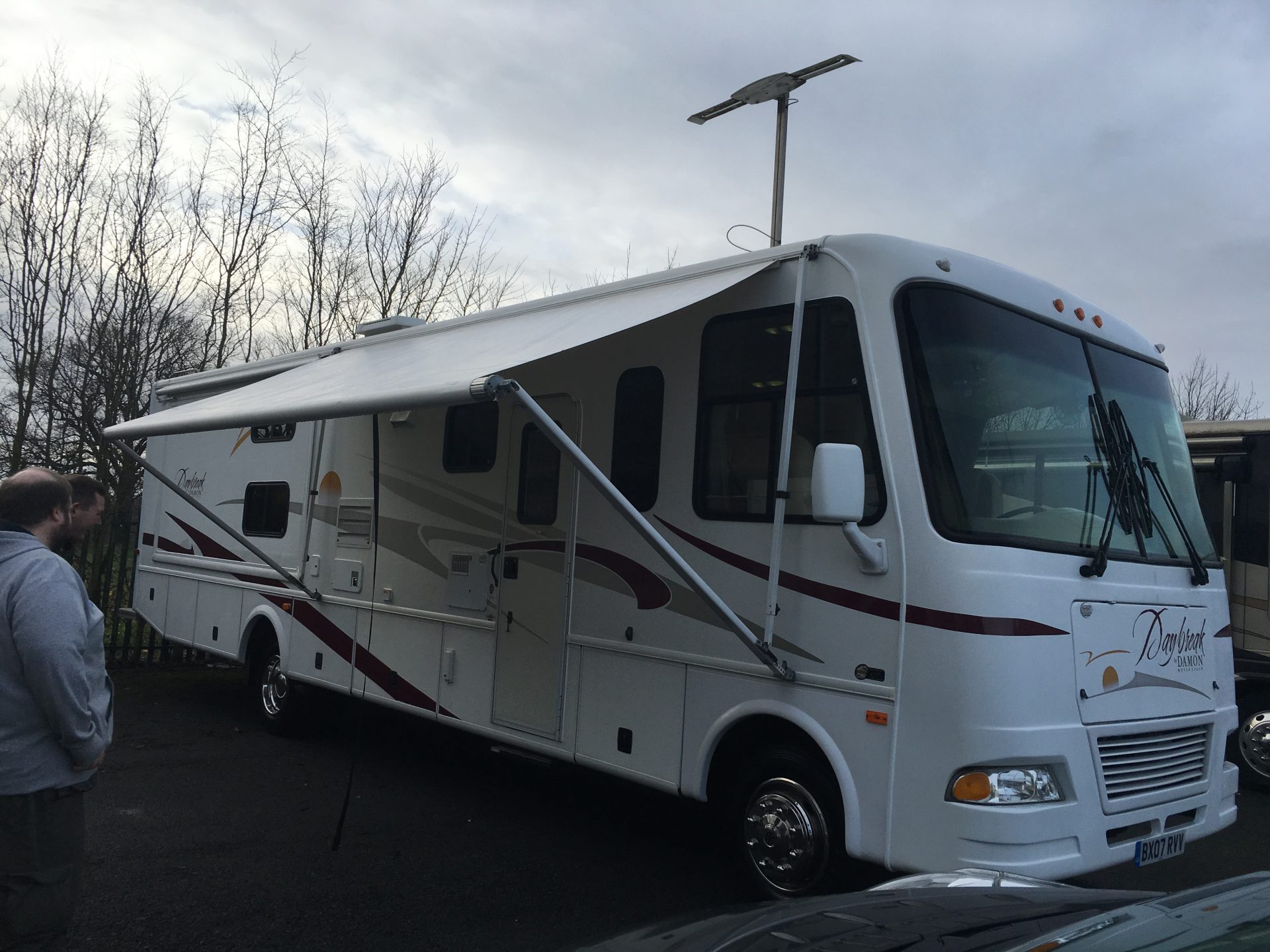 The more observant among you may have noticed that our secondhand Damon Daybreak RV is most definitely not a Wildcat 30GT fifth wheel! Also, didn’t we say that motorhomes were a bad idea too? Well, we ate those words and are finally driving around in our mobile home – 2007 Damon Daybreak 3276 RV named Harvey*.

What happened to the fifth wheel?

A few things really, firstly, it was going to be really expensive. Getting a pickup truck that can deal with 7,000kg means buying new we wanted a new fifth wheel as well.

Secondly, and perhaps more importantly, after discussions with people who’d travelled in Europe, motorhomes are a much better part of the culture there. Fifth wheels are big enough and stable enough to be used as motorhomes, but you’re always at risk of being moved on from a motorhome spot when it’s busy.

So, we ended up looking at RVs, which offered a better value option while also giving us the space of a fifth wheel.

What did we buy then?

As we wrote previously, we had quite a lot of trouble finding our RV, but we’re really pleased with the layout that we finally chose, the bunks are really helpful and we’d miss the dinette more than we thought.

For a petrol A class RV like our Damon, the chassis is made by either Ford or Workhorse. The chassis consists of the drivetrain (engine, transmission, wheels), cooling system, dashboard and steering – and not much else. As a result, motorhome manufacturers order chassis’s in advance, and they wait in parking lots to have their bodies fitted.

In our case, our chassis was released by Workhorse in August 2005, built by Damon sometime in 2006 for the 2007 model year, and finally first registered in the UK during 2007. This does make it hard to pin down exact specs and parts.

So Johnny Cash built it?

Journey to driving an RV

Because we were well prepared for buying a fifth wheel, I took a B+E driving test and passed. Unfortunately, that’s completely pointless for an RV! Harvey has a GVWR of 9,300kg, landing straight in the category C licence territory.

HGV licences are a little more difficult to get than the B+E. It starts with a medical at a GP’s office. The GP fills out a form and you send it to the DVLA. The DVLA decides if you are fit to drive – not the GP. Once you receive your provisional licence, you need to do theory and hazard perception tests – which must be passed with a much higher mark than is needed for a car licence!

If you pass all of that, congratulations – you’re now ready for driver training! I did my training at A Class HGV again, with Mark instructing me over 4 days. Mark was a great instructor, and we got on well during the course. The day of the test came along with plenty of fog, and while it was tense, I passed my test!

One of the things that the training taught me is how difficult it is to manoeuvre an HGV. I was learning in a little lorry, Harvey is 2.5 times longer!

Daunting. Daunting is not a strong enough word for how I felt when we went to collect Harvey. Mixed with a chunk of over-confidence too. I was sure that motorway driving would at least be easy, it was easy in the learner truck

Karen has already written about our collection day, but I can’t overstate how bad a drive home it was. I had no idea how to set my mirrors so I had very poor visibility. The headlights make candles look like the sun (a common RV issue). For 150 miles of snow driving, the wipers didn’t work. To top it all off, I couldn’t get the radio tuned in and a passing lorry clipped our mirror with the rear of his second trailer!

That drive dented my confidence a lot, which is probably good. I’ve done a lot more driving, on a lot more precarious (though not snow covered) roads since then. I think it’s safe to say I’ve gotten better at managing the size of Harvey.

Rewatching the RV Geeks videos on driving, along with those from RV 101 made a big difference. Taking time to change my mirrors and consider my setup meant that I could see out reasonably! I still need to set up some tape or similar to give me better lane guidance, but I’m getting there.

I’m still concerned whenever I get behind the wheel, but hopefully, that’ll keep me grounded and better prepared for our adventures.

* we don’t know who named it Harvey, but it looks like the name will stick around

First Few Weeks in the RV – Settling In