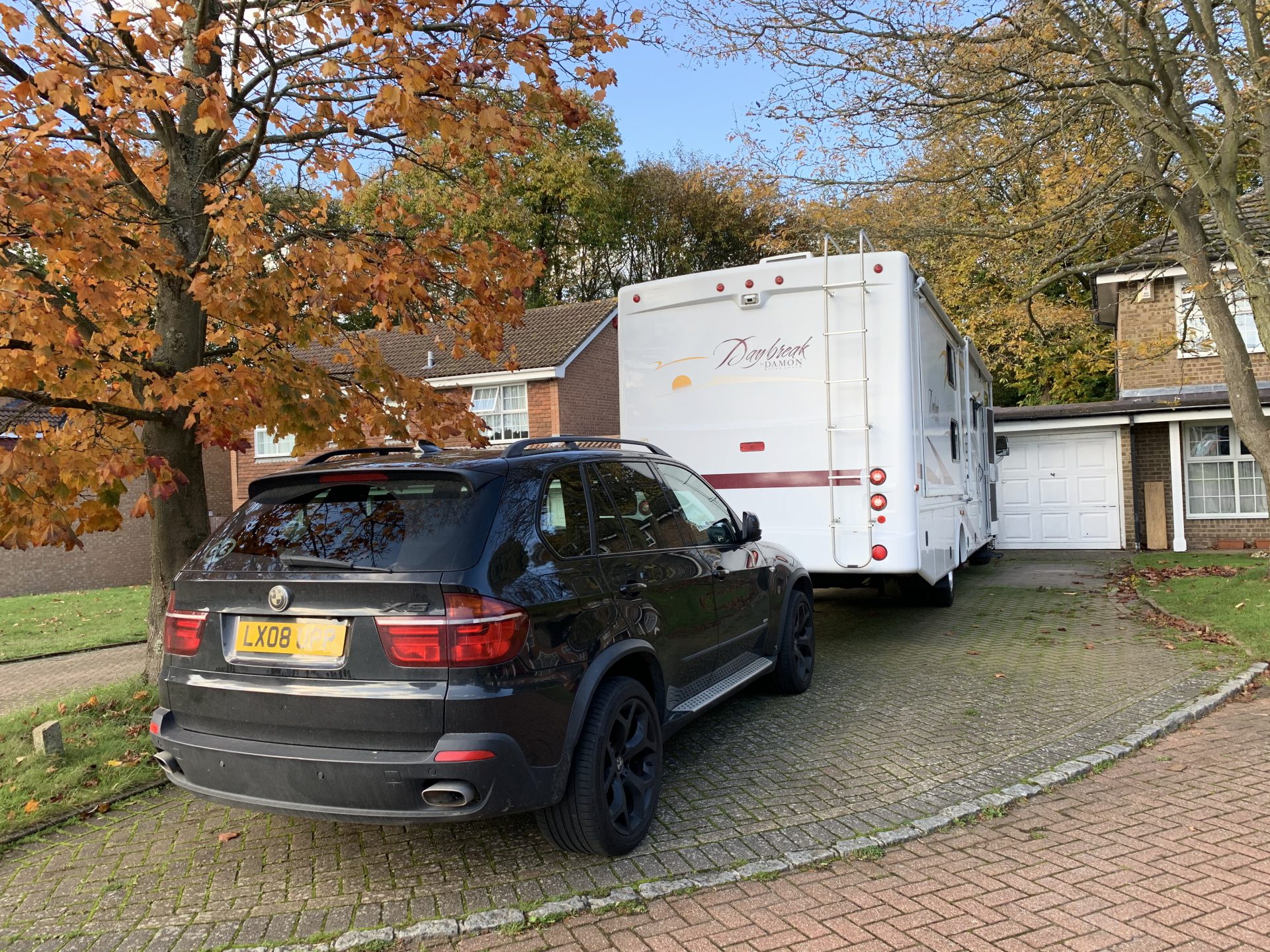 Changing the car, working, celebrating birthdays, Halloween and Christmas, seeing family and friends, fixing the new car, upgrades and fixing the RV, 7 long months in the UK dealing with issues!

Sorry, it’s been a while since we have published any blog posts. We spent longer in the UK than anticipated for many reasons, but we are now in Europe. Although we were in the UK since June and mostly near or at home, a lot happened.

We knew that once we were back in the UK, we had to change the 3 series convertible!

Yes, the car we only just bought before heading to Europe, the car we thought would be fun and perfect for the mountain roads. It needed to be changed for something more robust and bigger, (the French and Italian roads were not good for our little car).

For Olivia, it was either too cold and windy or too hot with the roof down.

We hit the exhaust all the time on speed bumps and entering car parks as the slopes were too sharp for such a low car. Also, all the potholes meant several broken/cracked wheels. The hunt for a new car was on, we had no real idea of what we wanted other than bigger!

We ended up selling the 3 series and bought a BMW X5, a car we have previously owned and loved and as soon as we got in one again our minds were made up. We love our X5.

Being back in the UK meant Olivia could enjoying socialising with her home ed friends and attend various activities and groups including trampolining, nature walks with friends, forest school and bouldering lessons which she really enjoys. She loves being on the road and meeting new people but it’s not the same as being with your friends. We spent time visiting family and friends which was lovely and so important. My nephew’s little boy is really growing up and changing, he is 2 already.

We caught up with all important work, to help us earn money on the road including setting up a new website for our software business KOG Digital.

Unfortunately, we started having issues with the new car. The brakes failed (just a little scary, thankfully I was only going slowly and on a campsite). This issue took some work (several mechanics and two garages) to figure out why but was finally fixed.

Then it started to judder when breaking around 50mph and turned out it needed new control arms.

It really was one thing after another with the X5 as we finally got everything fixed and we got a puncture in one of the tyres! As the tread was a little low anyway, we decided on new tyres all around. Not what we needed but at least they should be good for our next trip to Europe.

Suddenly it was mid-October, Olivia wanted to be around family and friends for her birthday and Christmas. With the cost of ferries for the RV and car so high, we didn’t want to go abroad for a few weeks; we decided we would just stay in the UK for the rest of the year.

We decided to take the opportunity to head north and visit George’s best friend and my niece.

My niece had recently moved to Manchester from Kent so we took a trip to see her which was wonderful. Being able to spend time with her and her boyfriend was lovely, helping them with some house decoration and exploring Manchester, Chester and the surrounding area was a welcome break from Kent.

We stayed at a site called Lady Heyes near Chester and travelled out from there for a few weeks, visiting museums, Jodrell Bank, Sea Life, Lego Discovery centre and the crazy busy Christmas markets in Manchester.

We also took a trip to Leeds to see George’s best friend and family, and meet their lovely new dog. It was so wonderful to spend some quality time with them catching up while the kids played.

On the way home, we stopped at a little listed site which was beautiful and took a trip to the spectacular space centre in Leicester.

Back in Kent, Birthdays and Christmas

Once back at the lovely Bearsted site in Kent, we relaxed and started planning our next trip to Europe which we hoped would start the beginning of January.

We had great fun celebrating Olivia’s 7th birthday in November. For her birthday she wanted to spend time with family so we visited Hastings, having fun on the beach, at the sea life centre and playing on the arcades. Then another day we visited Leeds castle to see their Christmas decorations and have fun at the Christmas fair/market followed by a lovely lunch. Then a day out at the farm with her friends.

Then we spent Christmas at the campsite which was wonderful. So many vans decorated up with lights, a party at reception on Christmas Eve where most of the guests on the site got together and had a good laugh. Christmas day we spent the day in the RV on-site opening presents, playing games, walking Pepper and having our first Christmas dinner in the van, George did a great job.

The rest of Christmas we visited family, played games, ate lots of food and had fun.

After scouting around for RV specialists in Kent, we took the decision to do as much servicing on the RV as possible by ourselves. With my lovely nephew (who is a mechanic) helping, we learned a lot in a couple of days. How to change the oil, filters, belt, belt pulleys, diff oil and to grease all the nipples. As well as check over the rest of the van for upcoming issues. George very kindly (at my request) bought me overalls and mechanic gloves for my birthday.

Of course, doing your own servicing has its benefits, but it also has its downsides. George misread the label on the diff so only ordered half of the diff oil we needed!

January arrived as did the dreaded MOT, the only thing stopping us leaving the UK. We were hopeful that the year would start well and in a way, it did as the RV passed the MOT, Yay! Though it turned out we needed a new exhaust! Thinking this was annoying but not the end of the world George started the drive home relatively happy.

However, on the way home, the LPG system failed and would not re-engage for any length of time. 8 minutes was the longest we could get it to work before it went over to petrol. Great, how much is this going to cost? Thankfully after a couple of different people came to look at the system it is now fixed. I will leave the details of this to George and another blog post.

However, while the LPG was not working we had to leave the Bearsted site as it was closing until March. It was sad to be leaving the site and the friends we’d made of the regulars and wardens, but we all had to move on.

We headed to Black Horse Farm site in Folkstone, on arrival at the site George noticed that the RV smelt strongly of petrol so we took a look only to find the petrol filter was split and dripping petrol everywhere! We were now stuck on the Folkstone site until this could be fixed. Thankfully the parts arrived from America within a few days and we managed to replace it with more effort than expected. Again I will leave full details to another post.

So with the LPG system and petrol filter fixed, we moved back home for a few weeks while we waited for the exhausts to arrive and be fitted.

We took this opportunity to empty storage, we now only own what is in the RV, and some tools, mementoes and home ed work which is stored at home. Everything else was sold, donated where possible or scrapped. Its such a freeing feeling to get rid of so much stuff.

With all of that out of the way, it was finally time to prep the RV with spares and food for our travels to Spain!

Panic Schooling, How to Home Educate in a Hurry