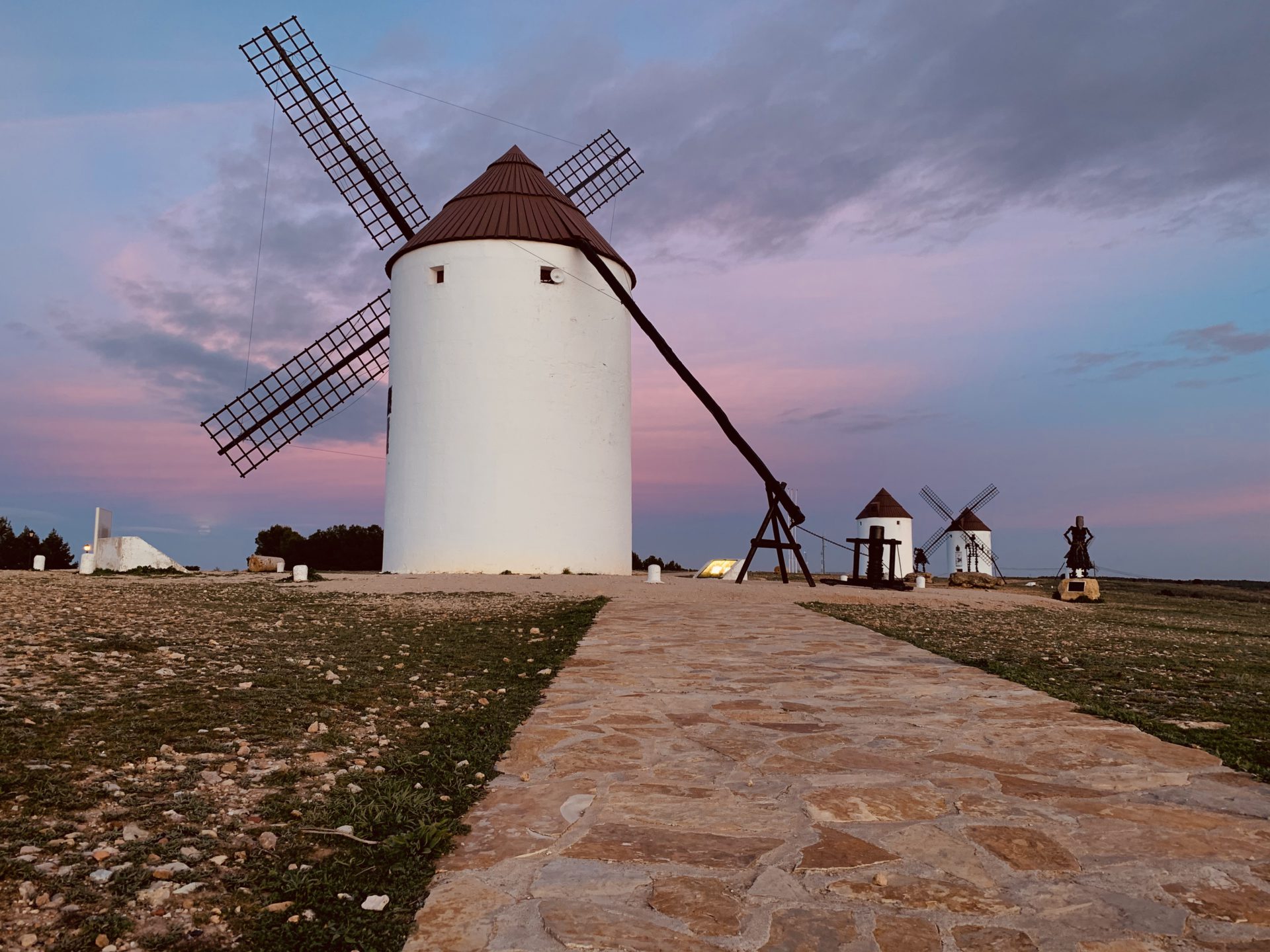 After leaving Aranjuez, we planned to do a few wild camping stops, one at some Molinos in a town about an hours drive from the campsite and the other at Castillo de Belmonte.

While the first part of the drive went well, our not-always-reliable sat nav took us through the local town which proved far too tight to reach the windmills on the hill. As we drove up gradually narrowing roads, more and more locals stopped to watch our progress. As we came to the top of the town, we were instructed to turn right, but weight and size limit signs denied us, and we had to head out of town until we could find somewhere to stop and rethink.

Some scouring of Google maps showed several possible routes up to the windmills, so Karen went scouting ahead in the X5. This proved to be very sensible, as the roads we’d found were closer to off-road tracks, and definitely unsuitable for the big RV.

After some replanning, we started heading towards castle Belmonte, our next planned stopover, but Karen spotted these windmills as we were driving past and we found a car park plenty big enough for the van and decided to stay.

We took a walk around the beautiful windmills and found that some would be open in the morning. So we had dinner and got ready to spend the night at this lovely spot. We were very much rewarded as when the sun started to set the sky put on an amazing show for us. We shot outside with our cameras and took in the amazing sunset.

In the morning we were able to tour one of that windmills that were restored in the ‘60s. While far simpler than the large windmills we’ve toured in the U.K., their simplicity allows for multiple mills to be built which more than makes up for the difference in capacity.

The windmills are Cylindrical in shape, they have three floors: the stable or ground floor with a spiral staircase which gives access to the cabin or first floor, and the top floor which contained the machinery. There are small windows which allow air to enter, as well as the spinning roof which allows the windmill blades to face the wind, and turns a 100 tooth gear. The gigantic blades make the gigantic scoop wheel spin to move the grindstone which transforms wheat into flour.

After our quick morning tour around the windmills, we set off to Castillo de Belmonte which was about half an hour away. As the landscape was so flat, you could see the castle sometime before we reached it along with several more windmills.

As George had researched the route, we reached the castle with no trouble. Although the car park was very bumpy and uneven, there was plenty of space for us to park. It was an amazing castle to visit.

We decided to stay overnight despite the uneven car park, and once again got to see a beautiful sunset. Though even with a castle in the foreground, it was not quite as incredible as yesterday’s windmills.