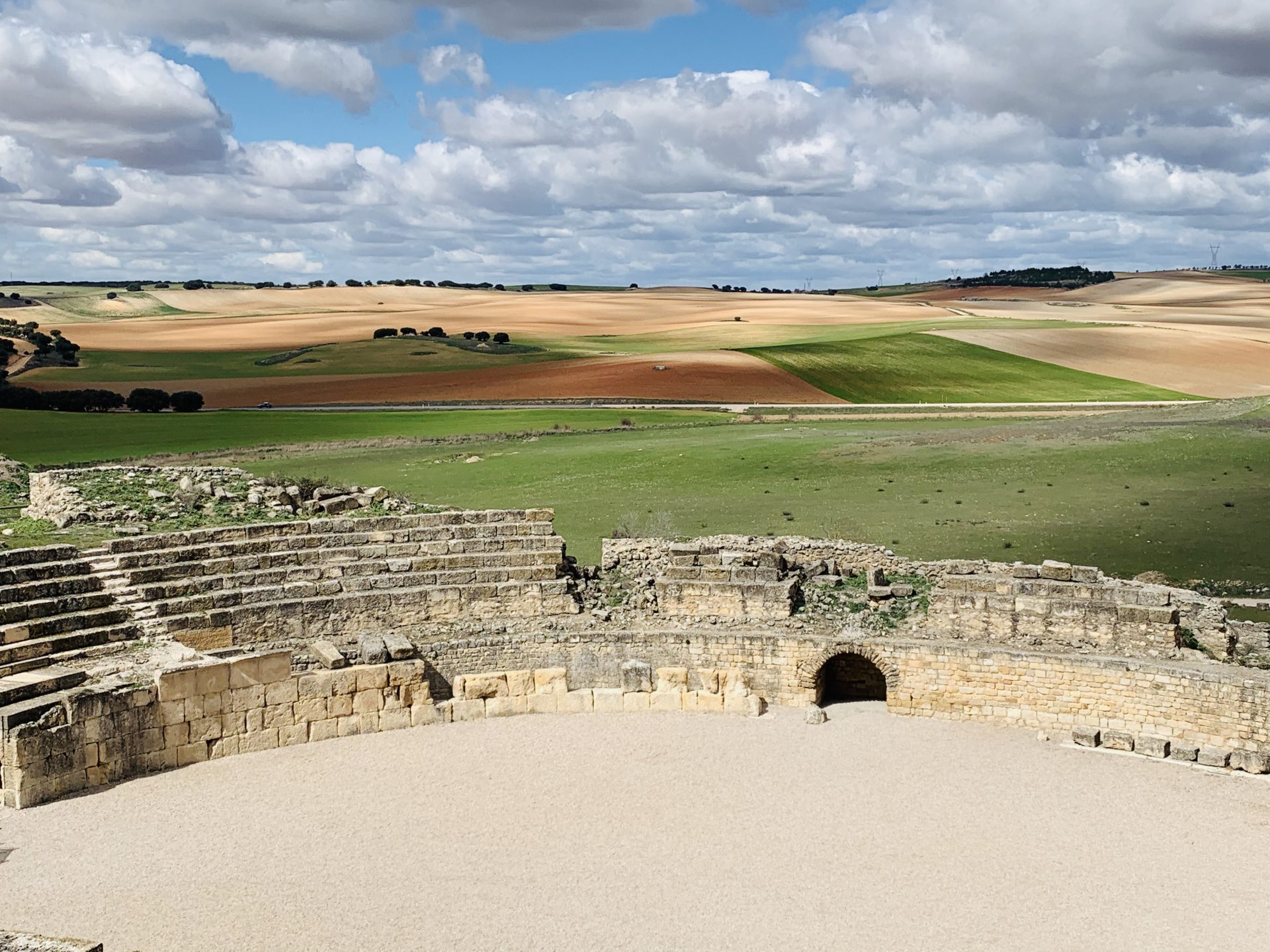 Having decided that cities and busy tourist spots were not the best choices of venue, with the coronavirus spreading further, we cast our net a little further afield and found the ruined Roman city of Segóbriga.

We’d initially not considered going there after all of our previous Roman adventures, but as this is claimed* to be the most important Roman site in Spain we decided to visit.

Segóbriga is a former Roman city near Saelices, in the province of Cuenca in Spain. It is possibly one of the most important archaeological sites of the Spanish Meseta.

The site includes an amphitheatre, theatre, the city walls and gates, two thermal buildings or Roman baths, and the Forum. There is also a necropolis, and the circus (Roman race track) is being excavated – its outline can be seen from the top of the hill.

This enclave was initially a Celtiberian fort. After the Roman conquest, at the beginning of the 2nd century, it became an oppidum or Celtiberian city. After the wars of Sertorius, among the 80s and 72 BC, it became the centre of all that part of the Meseta Central, with the control of a large territory.

In the time of Augustus, around year 12 BC, it ceased to be a stipendiary city, which paid tribute to Rome and became a municipium, a city ruled by Roman citizens. This increased the status of the city notably, which led to its economic boom and a large program of construction to include public leisure buildings and the wall that can be admired today. The city was an important communications centre. At the end of the mandate of Vespasian, the city was at its peak, having completed the building of the theatre and amphitheatre, and being fully integrated socially and economically in the Roman Empire.

Our Experience and Thoughts

We were welcomed by friendly members of staff in the modern Interpretation Center, which consists of a large car park, reception hall, exhibition hall and audiovisual room (unfortunately the video was only in Spanish).

We were given a map with numbered points to follow around the site. These points also referred to detailed information boards in both Spanish and English explaining the different sections and buildings.

Having previously been the administrative capital, we expected much from this visit. We’d been advised to wrap up warm as the hillside site can be very cold, and so it proved to be! With strong, consistent winds practically pushing us along the 1km path from the visitor centre to the ruins.

As we climbed higher, the wind took on a comical effect, with Olivia managing to lean into the wind and support herself as though flying at one point.

Considering its importance, the city of Segóbriga doesn’t appear to have been very large. But that may be due to the fact that most of the freemen of the city worked the mines or fields, bringing average life expectancy down to just 30 years.

We were thrilled to see how much of this city remains. There have been some revisions which some would find hard to accept but the site itself has enough of the original structure that you will be astonished at the skill of the builders nearly 2000 years ago.

The theatre and amphitheatre are the highlights of the trip. Considering this was one of the biggest amphitheatres in Spain we all found it surprising that it seated a mere 5,500 people, compared to Nimes 24,000 and the colosseum’s 87,000! But it is still a wonderful structure and when you step into the same sands where gladiators fought it is impossible not to feel amazed.

We noted also that the forum was small compared to the giant space at Pompeii. It really gave you an understanding as to how much more important settlements in Italy and even France were compared to those in Spain.

All that aside, this was a true Roman city and it was nice to reenact a fight in the amphitheatre, to put on a play in the theatre, and to walk around the baths. While the tourist route is a little confusing, this well-preserved site was well worth our visit today and we all came away glad we had taken time to visit.

Price at the time

It was a very reasonable price to visit the site. Something we are finding in Spain.

Reduced | 3 euros.
Students up to 25 years old. Young card. Large families. Over 65 years. Unemployed. Disabled
Groups of more than 25 people with prior reservation.

Free entry
Children under 8 years old.
Tuesday and Friday from 4 to 6 pm.

This site is well worth a visit if you are in the area. The site itself is amazing, with well looked after ruins. The paths are mostly easy to walk and the views are excellent. The small museum is good with information and artefacts and a short video in Spanish. There is a fair amount of walking, some uphill and no shade or shelter from wind or sun. Great visit for anyone interested in history including kids.

* a note about importance: while we read that this was an incredibly important archaeological site, there are plenty of other places in Spain which could lay claim to being the most important. We don’t make a judgement on that, it’s up to the experts.

Panic Schooling, How to Home Educate in a...