Navara vs Ranger & the rest: Pickup trucks & the agony of choice 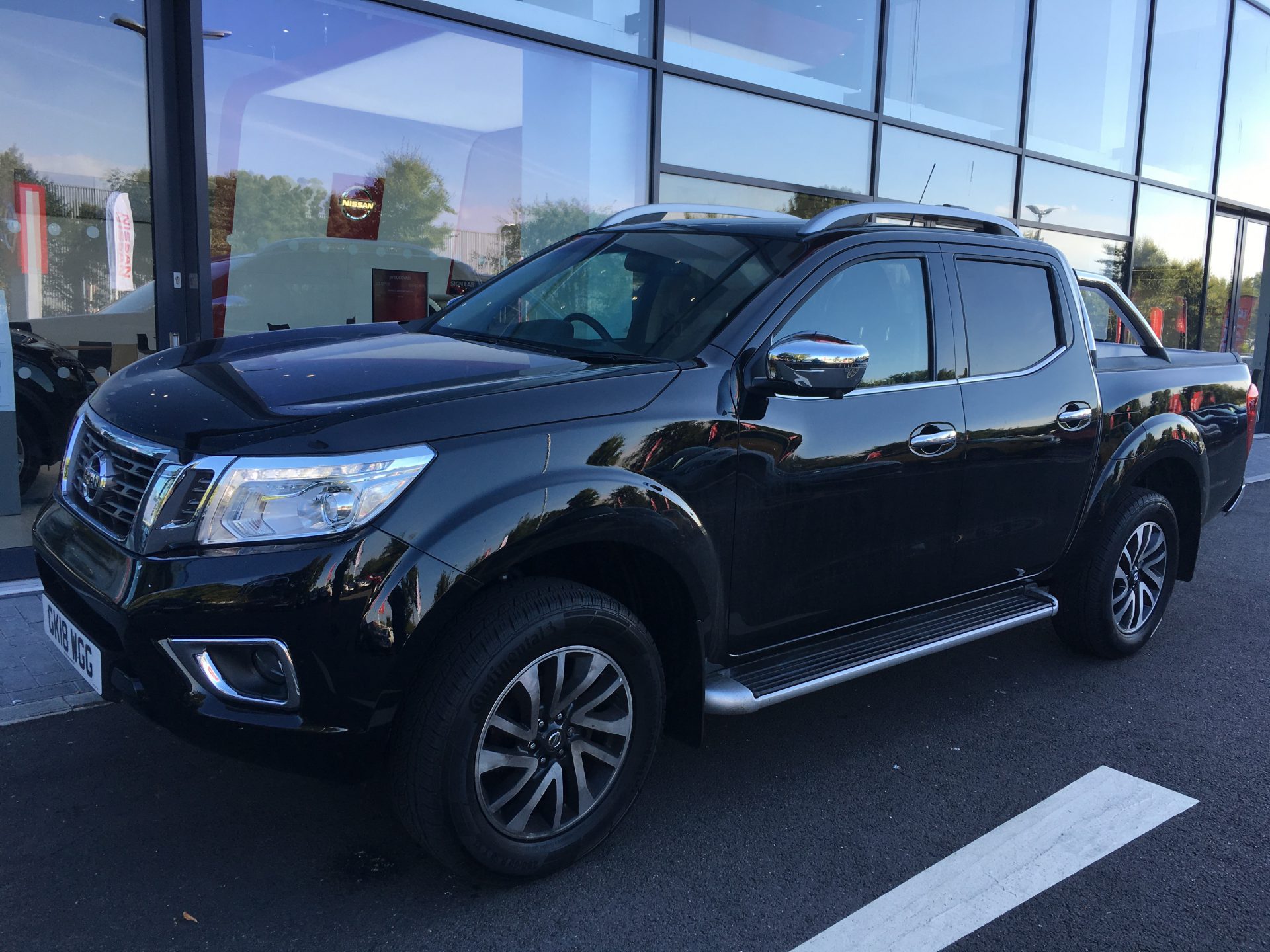 Every fifth wheeler needs a pickup truck to pull it. For us, the Ford Ranger and Nissan Navara joined a few other options in the quest to find our tow vehicle. This is how we got on.

Pickup trucks are commercial vehicles, built for carrying stuff and doing big tasks. We don’t really need most of that; we’re only interested in the commercial aspect for towing our heavy caravan.

Consequently, we’re looking for load capacity combined with a comfortable ride and a decent level of features; a luxury vehicle. How it looks is also a big factor.

None of the pickups on sale in the U.K. today offer that level of train weight; all of them need to be up-plated in order to carry that much weight. That will be a factor when looking at our pickup options. Up-plating normally consists of air-bags in the rear suspension or replacement springs.

All of the pickups are reviewed by a company called SV Tech who fit the replacement parts and then put the trucks through a range of tests. Once completed, the results are shared with the DVLA/VOSA and from then on, after fitting the kit, SV Tech will provide you with a new weight plate for fitting to the vehicle. Whether the truck reaches that 7,000kg requirement is down to how much spare capacity the stock vehicle has.

In the UK, tax rules make commercial vehicles very attractive; and as a consequence, the luxury pickup market has exploded over the last couple of decades. Businesses who don’t want the overhead of variable company car tax for nice cars have turned to top-of-the-range pickups to provide a cut-price alternative to an executive car that still has the features and some of the comfort.

Growth in this market is so much that VW joined a few years ago with the Amarok and Mercedes just launched the X class. I expect that more luxury manufacturers will get into the market soon, and even Tesla is investigating an electric option. However, the market leaders here are the Ford Ranger, Nissan Navara, Mitsubishi L200, Toyota Hilux, Isuzu D-Max, with the Amarok squeezing an impressive 6th place. Many of the top models in those ranges are the best sellers, such as the Ranger Wildtrak and the Navara Tekna.

The hot favourite going in was always going to be the Ford Ranger Wildtrak. Not only is the Ranger the most popular pickup in the UK right now, but it’s also got a pretty aggressive look and decades of history behind the name. Anecdotally, the Ranger is the pickup to beat, but we found that the ride was too harsh to live with when the bed was empty; the ride might improve when there’s more back there, but we weren’t able to test that. We were able to see that even on a dual carriageway, Karen could barely read her phone screen with all the bouncing along.

We liked the great looks, the giant mirrors and the idea of the torquey engine. The chassis is strong too, we heard that 8,000kg was well within this trucks limits if the law allowed it. The Rangers design, popularity and similarity to its US cousins has led to a wide variety of styling options becoming available.

We didn’t like the gearbox and ride; with extremely short first and second gears, the Ranger is very sensitive to the accelerator; combined with the bouncy when empty ride, some of the roads where we live meant we were kangarooing down the road like a learner. We also didn’t like the reduced speed limits in the UK or the fact that the dashboard reports the wrong speed limits as it creates confusion. We’re sure that the Apple Carplay interface will get better once iOS 12 is released (and Waze becomes available!), but for the moment, the giant icons and fonts on an 8″ screen are too much. The plethora of buttons on the steering wheel and poorly laid out centre dash buttons were also frustrating for a first time user.

Starting as a little bit of an outsider, the Nissan Navara Tekna seemed determinedly capable, but an also-ran to the Ranger. With it’s overly chromed attempt to look aggressive, the Navara misses the target in a way that the Ranger doesn’t; Nissan’s controversial move to a coil sprung rear end soon had us looking past this books cover though.

We liked the ride; stepping out of the Ranger, the Navara had much better control of its rear-end with no load in the bed. Broken country roads didn’t produce bangs and crashes from the back end, and the 7-speed gearbox reacted better to the throttle and made the most of the smaller engine. We also liked the slightly smaller steering wheel and layout of the controls; while Olivia appreciated the rear air-vents and clearer radio screen. The price was good too, coming in significantly cheaper than the Ranger.

We didn’t like the looks (still don’t), and the head unit isn’t exactly advanced; though as reviewers do mention – do you need much more than Bluetooth these days? The mirrors are a bit small and car-like for a big truck; the lack of a drivers grab handle makes getting in more of a palaver than it needs to be.

We didn’t end up test driving the other truck options for a variety of reasons. Neither the Toyota Hilux or Mitsubishi L200 offer the towing performance of the Ranger and Navara, and so would need greater modifications to reach the 7,000kg weight we needed – if indeed it was possible at all. The Isuzu D-Max, while capable, was destined for the bin as it didn’t offer a price saving over the Navara and didn’t meet the looks requirement. The VW Amarok was just too damned expensive (40% more expensive to be precise), and the Mercedes X-Class is a re-worked Navara – very nice, but not offering any more from a technical perspective. The X-Class will soon be available with a V6 engine and will be more powerful than any of the other options, but it looks like the weight of that engine will make the payload unusable.

What about a US pickup truck?

The most obvious choice for us was an imported American truck; the fifth wheel that we are getting is American and it would make sense to use a matching truck. There’s also the benefit of being left-hand drive – if we’re spending so much time on the continent. Unfortunately, a few things got in the way of this particular line of thought. For us, the most capable half-ton truck in the US at the moment is the F-150 3.5 V6 EcoBoost XLT 4×4 SuperCrew – it’s lighter than its competitors but has plenty of power for towing.

Even the smallest, half-ton pickups in the US are wider than a European spec pickup truck. That’s good for towing, but it’s bad for trying to drive in Europe the rest of the time; a Ranger or Navara will already be wide enough, but an F-150 is about as wide without any mirrors as a Ranger is with its great big mirrors folded out! There’s also a length issue, with the F-150 coming in at nearly 1m longer!

I’m not sure if the US uses different standards for measuring payload and tow ratings, but half-ton trucks can’t carry as much as you might imagine. In the US, a half-ton truck isn’t recommended for towing anything but the lightest fifth wheels – similar to our European trucks – and that becomes a problem once they get over here.

If like me, you’re stuck with a B+E driving licence, you’re limited to towing with a vehicle that weighs a maximum of 3,500kg. Being that much larger, even the aluminium bodied F-150 carries a hefty 286kg penalty over the practically svelte Nissan Navara; weighing in at over 2,200kg kerb weight (calculated figure – I couldn’t find a reliable number here) for the XLT SuperCrew. That doesn’t leave a lot of spare payload for the hitch and the weight of the caravan itself, but it’s comparable to the Ranger Wildtrak.

The train weight on the F-150 is good if specced correctly, it’s a bit higher than is required in fact, but we still can’t really go over that 7,000kg overall limit.

If you’re not limited by the licence, then other US trucks in the 3/4 ton or 1 ton range would be more than capable; but they all get wider as the numbers get higher.

This is the real kicker. Despite trucks in the US being pretty cheap, they’re still more expensive (at retail) than a UK pickup. Add in shipping costs, a massive 22% import tariff and VAT on top of it all, and that F-150 XLT comes in at £50-60k! Consequently, we’re looking at older models, but those aren’t necessarily specced the way that we want them, and they don’t come with any kind of manufacturer warranty.

Yes – that commercial vehicle rating might be great for tax, but it also means you have to obey van speed limits on the road. The exception for this is dual purpose vehicles, which get to drive at car speed limits. All quad-cab pickup trucks meet the main requirements, but the latest vehicles are over the 2,040kg unladen weight limit. The big Rangers and a few others are over that, and are subject to the lower speed limits; an easy thing to miss that could cost you your licence on the drive home.

While it came as a bit of a surprise to us, we chose the Navara. We’d worked out the figures for the Navara of course. It’s cheaper, it’s got a longer warranty, it’s lighter etc, but we still thought that we’d end up buying the Ranger.

In fact, we spent a lot of time feeling a little annoyed that the Navara drove better. We wanted the Ranger, it’s got more cool tech, a bigger engine, it looks cooler. Why do we have to get the other one? Karen even shed a few tears over it!

But ultimately, the Navara drove the best on the test drives. There was a lot to like about the Ranger, especially the looks, but our heads finally ruled and neither of us could deny that the Navara drove best. We felt like we would be able to spend hours behind the wheel instead of wanting to dump it and fly home within a fortnight! Once it’s in our hands, we’ll get busy with some vinyl wrap and get rid of the chrome – photoshopped concepts are already being considered!

Fueling and Fitting – A guide to HGVs...