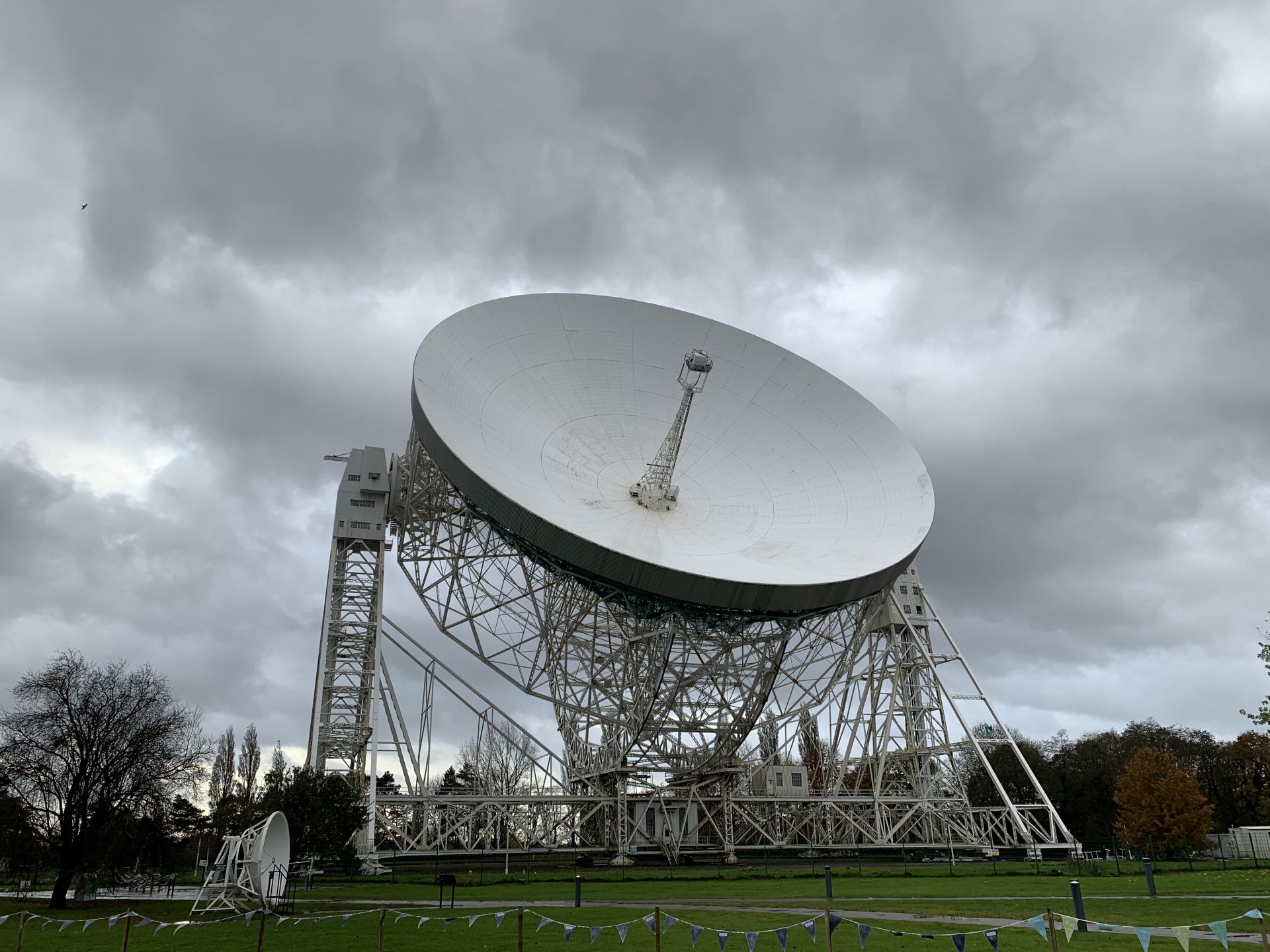 “Space is big. Really big. You just won’t believe how vastly, hugely, mindbogglingly big it is. I mean, you may think it’s a long way down the road to the chemist’s, but that’s just peanuts to space.”

In an effort to understand the vastness of space, Jodrell Bank has birthed the radio autonomy movement and provided invaluable knowledge over the last 70 years.

Jodrell Bank Observatory, which is owned by the University of Manchester, is home to the famous Lovell Telescope, the world’s third-largest steerable radio telescope. Completed in 1957, the dish was the largest of its kind anywhere in the world until 1973. It is now the UK’s 32nd site to be added to the prestigious UNESCO list.

The site offers daily walking tours of the radio telescope with one of the University of Manchester physics students. During the walk around the base of the Lovell Telescope, you will find out more about how it works, its history, and some of its research. Seeing the near 90m high radio telescope that has become an iconic landmark on the Cheshire landscape up close and in action is an exhilarating sight.

The day starts in the Planet Pavilion, where you buy your tickets and collect your map. You’re reminded of the fact that your mobile phone and any devices must be put on aeroplane mode or turned off. You then enter the first gallery with a superb working scale model of our own solar system (orrery) in a room decorated with a giant image of the milky way and the universe which surrounds us. There are several interactive screens where you can learn more about the sun and planets, Earth and moon, other galaxies and more.

The Planet Pavilion also includes a small gift shop and a reasonable cafe serving locally and ethically sourced hot and cold foods. While you eat you can admire the custom clocks showing the time on different planets as well as the different ways time can be measured on Earth.

The site covers around 35 acres and includes several learning buildings, the telescope, large gardens and grounds. There are fully accessible pathways which connect the playground and parts of the arboretum (tree collection) and we imagine it would be a great family-friendly space, perfect for a picnic, a gentle walk, or even for burning off some energy. Unfortunately, we did not get to see the gardens as the weather was so poor, but we did manage to have a quick play with some of the outdoor experiments such as the very impressive whispering dishes, wheel race and the Jupiter equator demonstrator.

Of course, the area is dominated by the enormous Lovell telescope. While we and many others have seen it from the surrounding roads, the huge framework and dish was stunning when up close and personal. The little building on the side contains at least 6 floors, and spindly walkways spider out from there to other areas of the telescope for maintenance.

While at the site, the telescope changed direction twice, moving incredibly quietly on a circular railway track that provides 360 degrees of movement. It was so quiet, we didn’t notice it moving until we saw it pointing a different way. Up close, watching the big dish spin was a strange sight, as we couldn’t relate to something so large moving so gracefully.

The space pavilion exhibition offers visitors interactive displays which are related to discoveries made by radio astronomy, such as the sound of the big bang, the sound of pulsars, discovering distant planets, and the opportunity to learn more about distant objects in space. This exhibition was enjoyable and informative for both children and adults.

We were lucky to be able to visit Jodrell Bank on a Home Education Day. This meant that we were able to look around the site as well as book Olivia onto two science workshops. It was great to see this site supporting home educators in this way, and we hope that more sites follow their example.

A hands-on and engaging workshop, where we got to complete a series of experiments exploring a variety of science concepts linked to the Solar System.

Experiments included: exploring the strength of gravity on different planets, investigating the brightness of sunlight throughout the Solar System, testing the pH of sand like a Mars rover, and performing a series of tests to identify a real meteorite!

An interactive workshop, finding out more about British astronaut Tim Peake and his mission to the International Space Station, in 2016. Learning about some of the key skills needed not only to be an astronaut, but a scientist or engineer working in the space industry.

Olivia got the opportunity to construct and test a circuit while wearing space gloves, and take readings of her own health and fitness data. The workshop also featured an explosive rocket engine demonstration!

Both these workshops were very engaging and informative as well as a lot of fun.

There are lots of improvements taking place at the site. Over the next 3 years, they will be finalising the plans and commencing the construction of a new visitor facility – the First Light Pavilion. They are planning and preparing future programmes of heritage engagement, tours of the south side and planetarium sessions and on-gallery activities.

We really enjoyed visiting Jodrell, we did not really know much of the history of the site and neither did many of our family and friends, even those that knew the area. We are very glad that we were able to visit the site, especially on a home Education day as this meant there was a lot more to do while visiting the site.

The current exhibition centre in the Space Pavilion is a little small to keep kids entertained for more than a few hours. Hopefully the new up and coming First Light centre will add further engaging content.

I would recommend a visit if you are in the area, to see this magnificent structure and learn more about Britains pioneering place on space exploration.

We look forward to visiting again in the future once the First Light Project is complete.

Impending Lockdown in Spain, with Official Information hard to obtain