While out for a walk at Silverhill Wood, the site of a former colliery, we met a local man who told us about the area and suggested we visited the National Coal Mining Museum. We had heard about the museum before, and inspired by this man’s recommendation, we decided to visit.

The museum is a 45-acre site full of history, things to see, do and experience including the 140-metre underground mine, galleries and buildings, ponies, Hope Pit, Hope Store, Miners’ memorial garden, Nicholson-Harris Blacksmith Pit, adventure playground, nature trail and more. We did not manage to see anywhere near everything but we had a great day.

When we arrived we booked straight onto the hour and a half underground tour (children must be 5 years or older). We were given a traditional miners ‘check’ and asked for a £5 deposit per person. After the tour you can keep the check and donate the £5 to help keep the mine running or you can ask for your £5 back.

We were directed to the lamproom where we met our guide, Taz, an ex-miner. We got kitted out with hard hats, safety lamp and were forced to hand in our ‘contraband’ (phones, cameras, keys, anything with a battery or that could make a spark). The miners were not allowed ‘contraband‘ underground for health and safety reasons, and it’s the same for visitors today too. Visitors can leave their items safely locked in their cars or in the lamproom with the attendant. We then had the opportunity to have a professional photo taken – £7 – before stepping into the ‘cage’ to descend 140m underground.

Descending In The Cage

17 of us were packed into the cage, the same cage that would take 20-30 men down into the mine on a daily basis. When we dropped, the initial drop was fast, hard and somewhat scary before settling down. Taz informed us that we were going 5 times slower than it would be dropped when the mine was working!

Taz took us through the mine, explaining with great passion about the different ages of mining, from Victorian times when women and children worked underground alongside the men. The roles of the pit ponies, how modern machinery changed coal mines. He explained that to some, mining was a vocation rather than a job. That it was not just about mining it was about the community in and around the mine. He told us of his experiences good and bad from his life in the mines.

There are opportunities to crawl through tunnels, a clean box tunnel and a dirty, dusty, tight, real tunnel which gives you a sense of what it would have been like.

The tour was amazing, far better than we expected and full of history and passion. It was a little long for our 6-year-old, and it was all too tempting at times to play with the lamp we were given but she took in a lot and learnt loads.

We had a nice and reasonably priced lunch in the cafe, they do a great kids box and have hot and cold options on the menu.

The Miners Lives Gallery tries to add context to how miners and their families lived. The gallery is broken into different aspects of miners lives, with each section showing progress through the years.

A lot of mining towns were created by the mine owner in order to house miners, and the gallery does an effective job of showing how they progressed. As owners found that nicer housing attracted better workers and improved productivity.

The gallery isn’t just focused on the miners, it also considers the lives of their families. After the Mines and Collieries Act of 1842, women couldn’t work underground and young children couldn’t work in a mine at all. This change had a massive impact on mining town life, as children now went to school longer and many women stayed at home; creating a lot of the expectation that women should do all the cooking and cleaning!

Beyond the lives section, there are a lot of artefacts and information about improving technology and safety within the mines. Olivia was especially pleased to learn that canaries were housed in resuscitating cages, which meant that canaries (used to detect poisonous conditions in the mine) didn’t die as she thought, but could survive in their own little space ship!

Finally there is a section on the political history of mining, the strikes, and the eventual closure of most coal mining in the UK. While this section is informative, it was a bit too much for Olivia by this time, so we moved on.

Our 6 year old loved the Pit, and really enjoyed the forging demonstration of a hook. As well as the demonstrations there are a few hands-on items in the pit including a lever system where kids can guess and then try out which lever would make it easier to lift the weight. There was also a gears and belts section for the kids to try out.

We started the beautiful Nature Trail at the water treatment plant which cleans the water from the pit and leads it down to the amazing reed beds where you can spot wildlife from the bird hides. You then follow a path down to a stream with waterfalls which you follow until you reach the up hill climb Back to the Caphouse. Even in February this was a pleasant walk.

There is an amazing adventure playground at the site, with an area for toddlers and loads for older kids. Perfect for little ones to run off steam after lots of learning. 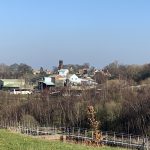 The National Coal Mining Museum for England, is located just off the M1 near Wakefield and provides a great day out with a unique opportunity to travel 140 metres underground to explore England's last deep coal mine.

Pet Passport for Pepper and Travelling with a Pet