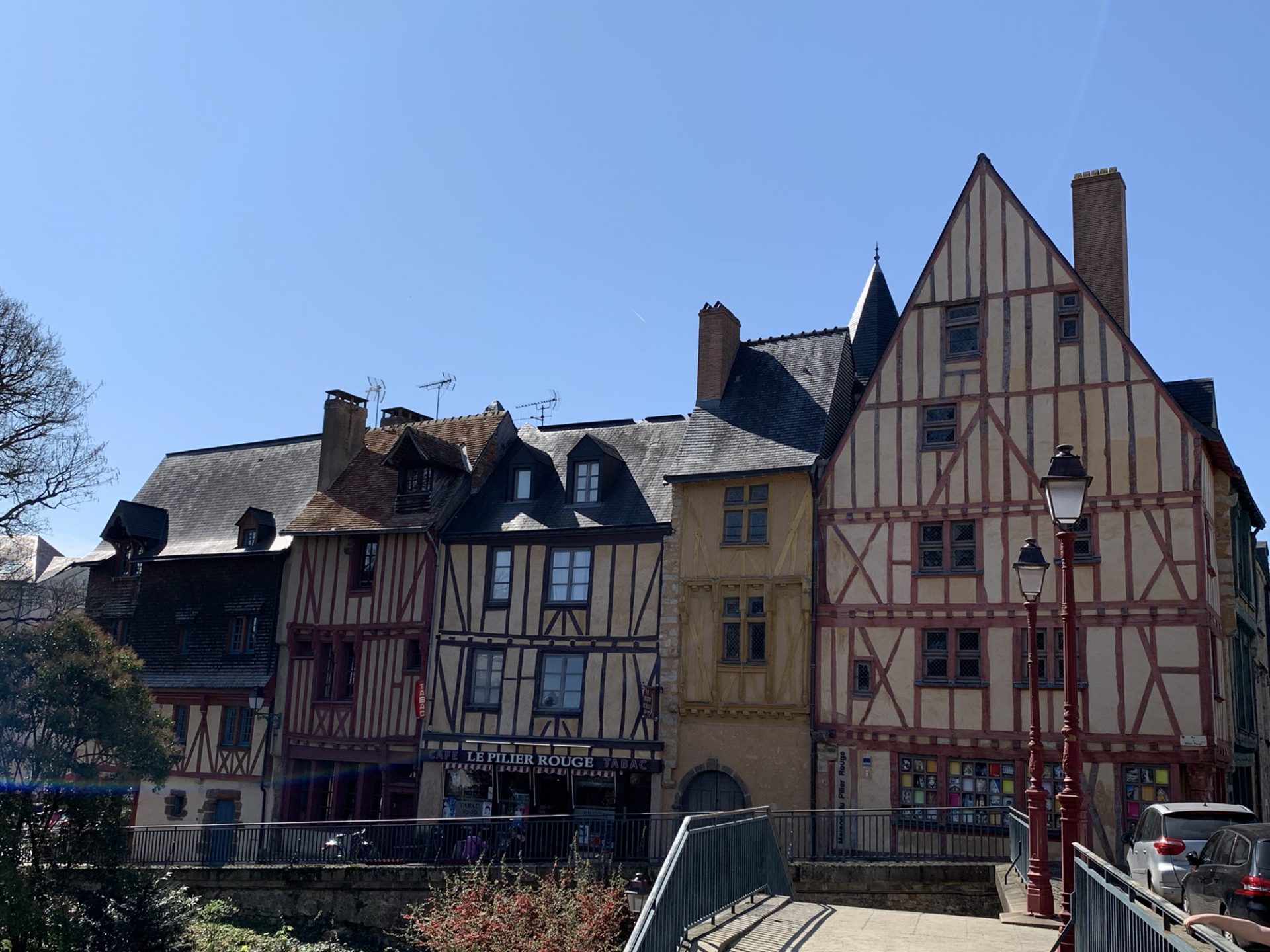 Our first campsite stay was Le Mans. We stayed on the lovely Camping Neuville – Camping Le Vieux Moulin site which sits just drive outside the town of Le Mans. What a beautiful part of the country Le Mans is in, stunning fields and rivers to walk along.

Neuville-sur-Sarthe was a pleasant little village with a pretty little church, a supermarket, pharmacy, patisserie, hairdressers, butchers/delicatessen and restaurant/bar. This was Olivia’s first ever experience of a patisserie and where we bought our first and most delicious croissants. Just down from the site was a lovely grass area with benches and the river Sarthe with a stunning weir.

We drove into Le Mans in order to look around the old town, surprisingly for us we found a free car park close to the Roman wall. Le Mans may be world renowned for its motor racing track, even Steve McQueen films, but the old town of Le Mans is a lot more, with its beautifully preserved medieval architecture, relaxing park and amazing Roman wall we were very pleasantly surprised.

The medieval heart of Le Mans is largely unspoilt, with a maze of beautiful buildings, built with both stone and half-timbered, dating back to the late middle ages or early Renaissance in a very similar style to the Tudor buildings in England. The pretty cobbled streets, stepped alleyways and narrow lanes with limited traffic access make the old town of Le Mans a nice place for strolling. Olivia found the buildings and little alleys interesting but she did get a bit bored just walking around.

The old city walls still contain original Roman sections which are easily accessed. There is a very well-preserved 500m section of the Roman wall that follows the River Sarthe with stunning Roman patterns and stone work. Its ochre sandstone held together by pink mortar earned it the name of “red city”. This section was part of the wall built between 270 and 310 that encircled the city for 1,300m and dotted with 26 towers. Olivia loved the fact that she could walk up and touch the wall, seeing all the detail of the patterns and how wide the walls were from a collapsed tower. I could have spent ages examining and looking at the beautiful piece of history.

We found a free car park right next to the wall which was very handy. There are some lovely sections of grass near the wall, perfect for picnics, to sit and admire the beauty of the wall and for kids to run around.

The gothic Cathedrale Saint-Julien is a very impressive structure, with quite over the top architecture that stands out above the rest of the city. It is one of the largest and oldest cathedrals in France. The cathedral houses a magnificent stained glass window of the Ascension, one of the oldest and dating back to 1160, and boasts a stunning 14th century frescoed ceiling showing the choir of angels. The cathedral stands on a former pagan religious site and a menhir can be seen leaning against the cathedral wall. We found this cathedral to be extremely beautiful with its high arches, sculptures and complex stained glass windows it really put the Canterbury Cathedral in Kent, England to shame. It was in here that we introduced Olivia to the concept of a confession box and very inappropriately but very funnily she started making up funny confessions.

We spent a lovely sunny lunchtime in the Parc de Tesse with some sandwiches and patisseries that we picked up in the town. Parc de Tesse is a garden where you can stroll and relax at a few steps from the activity of the city centre amongst beautiful trees and flowers beds.

We also found a giant hourglass art installation (Le Sablier)- a sand timer that takes six months to run down, and is refilled every solstice by the sculptor Jean-Bernard Métais.

We intended only to visit the museum but the sound of cars on the Bugatti track drew us to the circuit first. With a beautiful blue sky and a Beetle Fun Cup endurance race, it was a great day to wander around the track and initiate Olivia with her first racing experience. She loved it, picked a car she wanted to support and cheered it on.

There were only a few spectators, most of which were wandering the track as we were, and there was plenty of works ongoing as they prepared for the 24hr race in June. Both Karen and I were quite wistful for the days when we regularly watched racing and didn’t realise we missed it so much. We’d like to come back on 15th June for the big race but maybe that’s a little too much for Olivia to manage.

After the sun and the noise, we headed into the museum itself, through the hall of heroes highlighting important people in the Le Mans story; great drivers, team owners, innovators and the people who allowed the race to happen at all.

From there we saw dioramas of the track throughout history, along with models of almost every car that has ever competed.

Finally we toured the motorcycles and cars that have defined the 24 hours for almost 100 years, from cars that still had their rear seats, through to the latest hybrid prototypes. Special mentions for my favourites – the Porsche 962, Jaguar XJR9, Ford GT40 and Ferrari 250 GTO, but also to the SRT 41, formed by Frederic Sausset, who developed a prototype car that he could drive despite having lost 4 limbs, and which could be converted back for fully able drivers during a driver change in the race.

Finally we headed out and drove the public sections of the track. We were disappointed (though not surprised) that there are weight limits preventing us getting pictures of the RV on the Mulsanne straight! But the BMW was more than up to the task and there were many other drivers and riders imagining their bid for 24 hour glory along with us.

Le Mans is very beautiful area and should not be missed, we were very surprised at what we found and glad we took the time to explore.