Have You Tried Reversing The Polarity? Shore Power Problems 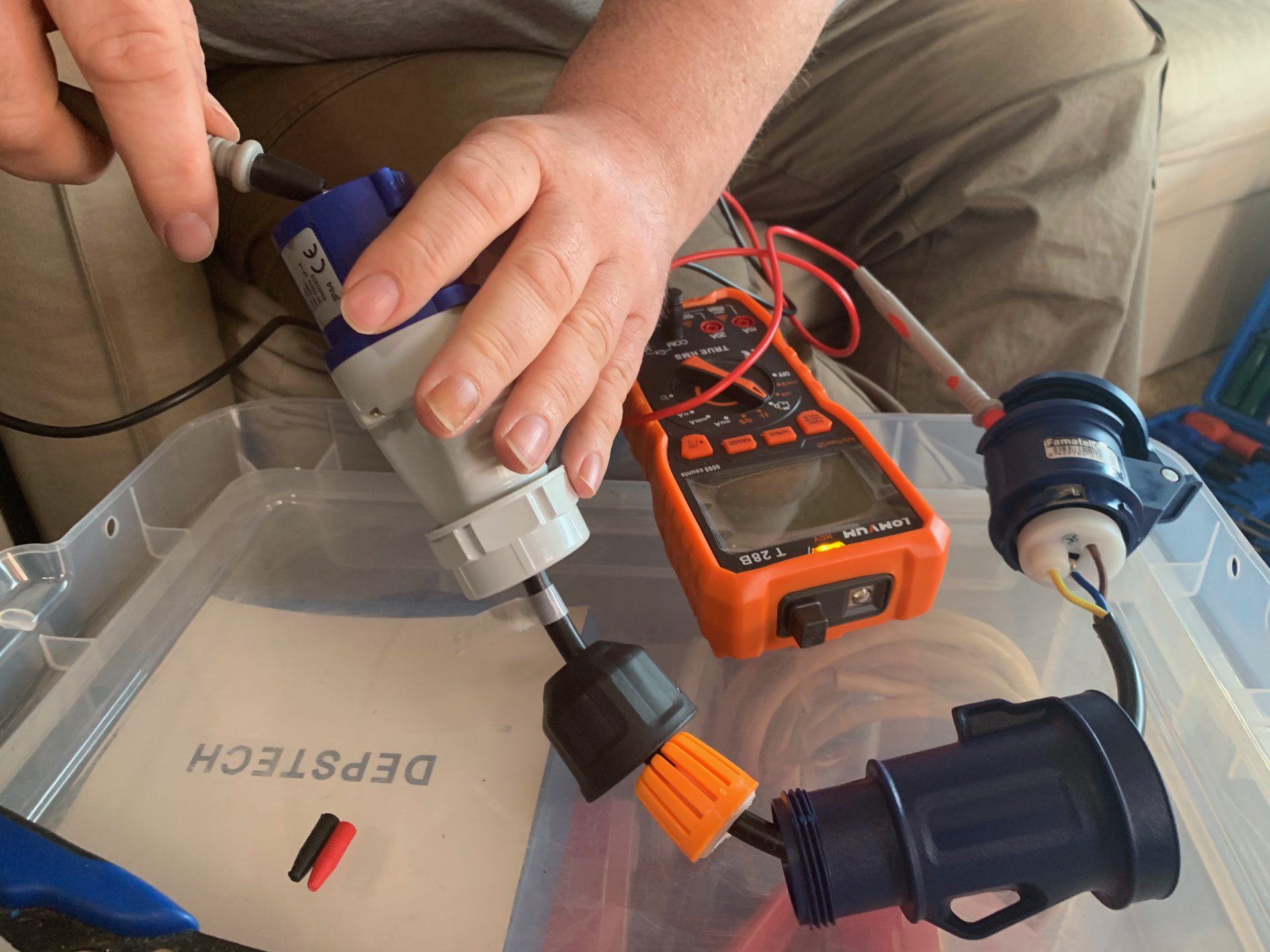 It started with an innocent question, “Is the water heater switched on? I’m only getting cold water”. A quick look inside the cupboard showed the switch glowing bright with power. We’d installed our Camco Water Heater upgrade a few months before and it hadn’t gone entirely smoothly. Fearing more wiring problems, we braced ourselves for a big DIY project, but we’d forgotten about a sci-fi trope that’s also a quirk of European campsites…

When we found a little time, we started the diagnostic process. We got all of our electrical tools out from the locker, not an easy task at this time due to being under a slide that was hemmed in by a hedge.

“Let’s start at the top,” we said. When we installed the water heater, we’d had a wiring issue caused by not stripping away enough insulation in our fused spur. We took out the multimeter, started pulling connections from the spur and testing for power.

But there was plenty of voltage at the cables for the spur. What else could it be? We started pulling more connections, following the wiring diagram that we had scanned before disposing of the original packaging. Everything seemed to be wired correctly. We started to realise that maybe this was a burned-out heater element or an issue in the control box attached to the water tank.

After checking that we did have resistance through the element, we put all of the connections back together and hoped that it would work. But despite that brightly glowing switch, nothing was heating. Dejectedly, Karen switched the heater off.

And the switch, that shining red beacon that mocked our lack of hot water, stayed lit.

The Switch Must Be Broken!

This was a breakthrough! Of course, the switch was broken! Somehow!

We took the switch out of its mount and started testing it against the multimeter. Of course, it was going to be broken. What else could cause it to stay lit when it was off?

The switch. Was. Not. Broken.

If we connected across the outputs, the switch operated correctly. Maybe it was just wired incorrectly? We put the switch back in and it continued to shine whether it was switched on or off.

How could this be? There was definitely no connection from Live to Neutral or Earth when the switch was off. We started looking for diagrams of the internal workings of the switch when we had a sudden thought.

What would happen if the Neutral and the Earth are connected?

We disconnected the RV from the mains power and spun up the generator. Sure enough, now the switch operated correctly, and we could tell that the water heater was working again from the sound and feel of it. Clearly, the issue was with the campsite, not us.

One of the things we’d always heard about, but had never experienced, was reverse polarity. Reverse polarity is where the live and neutral connections are reversed for some reason.

Now, like many of you who know about AC power are probably thinking, we didn’t see reverse polarity as much of an issue. AC power switches polarity 50 times a second, it doesn’t really matter which way round the live and neutral connections are, power is power.

In countries that adopted this, rules were passed about colours and standards of wiring to ensure that the live connector was always the hot leg. But in Europe, they continued to use double-pole switches and kept using similar colours for live and neutral.

What this led to, was that in Europe it was sometimes difficult when running long lengths of cable (say to multiple outlet points in a campsite), to ensure that you got the live and neutral the right way round. The only way to check is to turn on the power and test, and that’s a bit more effort than is needed when everyone has double-pole switches.

So what are the risks? Well, primarily, the hot leg will connect via whatever route it can. If the hot leg is the live connection, a single-pole switch will leave the neutral and earth connected. If the hot leg is the neutral connection, a single-pole switch will leave power running from the neutral to the earth all the time. This means that parts of a device may be live that should never be, such as the outer casing of a fridge or microwave. If a device isn’t shielded by a double pole switch, it can become quite dangerous.

For the most part, campervans and caravans have been built to deal with reverse polarity for many years. However, additions and modifications don’t necessarily take that into account, and we have no idea if American RVs are designed to handle this particular quirk. Even further to that, our RV has had all of its wiring messed with so that it works with 240v and can still operate its 120v original equipment.

So How Did This Affect The Water Heater?

Well, the reason that the single pole switch stayed lit, was because the neutral and earth connections are bonded. Power continued flowing through those two connections, allowing the bulb inside to light. Our fused spur is a double-pole switch, so when we switched it off there, the bulb did go out and the power was truly off.

As for why the heater didn’t work when it was switched on, we’re not sure. Maybe something in the control circuit required the hot leg to be live. What we do know, is that we’re lucky the entire water heater didn’t become live. The wiring for the Camco uses the water heater as earth, so if the neutral was still connected and earthing through the heater then touching the outside, or potentially just turning on the water, could have given us a potentially lethal shock.

Testing And Resolving The Issue

In the UK, camping stores and Amazon have plenty of reverse polarity testers available. There are two kinds, ones that plug into your vans electrics after you’ve connected to the campsite and ones that connect to the pole in the campsite before you connect your van. However, in Europe, such testers are not readily available because they don’t consider reverse polarity as much of an issue.

We headed out to a nearby Leroy-Merlin DIY store and managed to purchase a couple of adapters that we could mash together to make our Reverse Polarity Correction Cable. Once we took the ends apart, we basically wired them so that the earth remained as the earth, but the live connection on one end went to the neutral on the other, and vice-versa.

With the short adapter made, we tentatively reconnected the RV with it. We were 99.999% sure that we’d correctly diagnosed the issue and made the adapter correctly. But if we were wrong then we could be doing some serious damage…

Once we get back to the UK, we’ll purchase a proper tester, but until then, we’ll get out the multimeter and our adapter before we hook up.