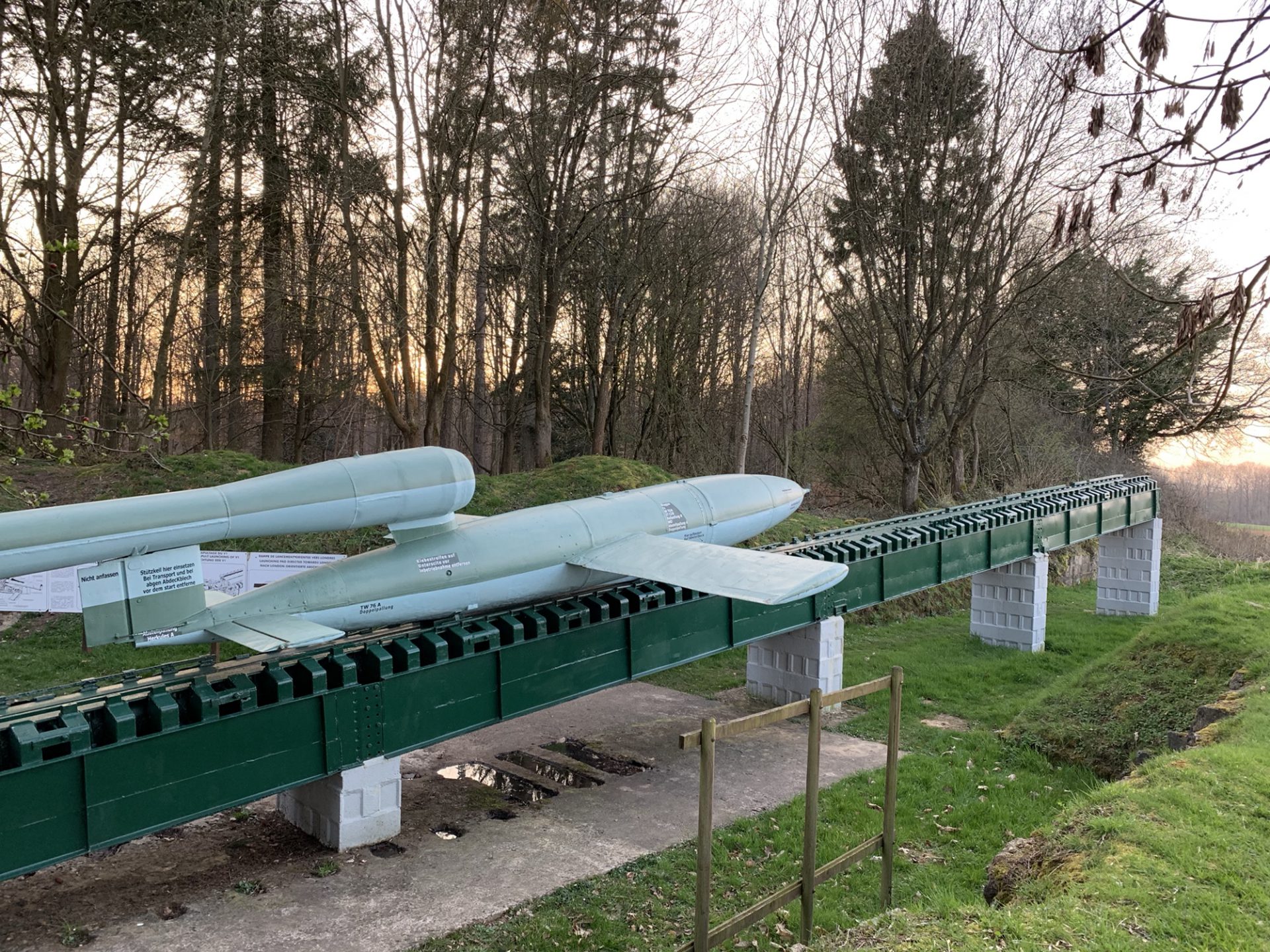 Our first night in France leads us to a spooky spot in the woods, where dark minded people once prepared to unleash havoc on London during World War 2…

After our arrival in France, we stayed a couple of nights in the (mostly deserted) car park of Val Ygot, a V1 launch site built during WWII. While the site never had the opportunity to send its deadly cargo over the channel, its remains have been turned into a memorial.

Constructed in the autumn of 1943, Val Ygot was designed as a ‘heavy’ launch site for the V1 bomb. The site consisted of 13 buildings spread over 3 hectares. Bombs would be delivered via rail and truck and stored at the site prior to launch.

The heavy site meant that there was storage for 30-40 complete V1 bombs; as well as housing for officers and other people. Separate buildings stored parts, launch materials and fuses to prevent disasters from happening. Storage hangers were designed with type so that blasts outside the tunnels would not damage the bombs within.

Paths with narrow gauge rails wound between the buildings and up to the launch catapult. Just prior to the catapult, an Amagnetic building, built with no ferrous materials, was used to calibrate the bombs guidance compass. The building and the catapult were both aligned along the same axis, meaning that once built, the site’s aim was set in literal stone, and Val Ygot pointed at London, some 200km away.

Val Ygot was one of at least 117 V1 launch sites in the Seine Maritime area. Though it was one of the first, its existence was revealed to the allies by Michel Holland before it could be used, and the site was bombed on a regular basis until the allies took control of the area in 1944.

Many of the other launch sites that came after were of a ‘light’ design, consisting of less buildings and affording more camouflage. These sites were far more deadly to both Britain and France, as nearly 25% of V1 bombs landed in France before ever reaching their target country.

What was the V1 bomb?

The V1 was an unmanned bomb, powered by an Argus jet engine, which could follow a straight course until it ran out of fuel or the fuel was deliberately shut off. Known as the doodlebug in Britain, if you heard the distinctive sound of the pulse jet cut out, you knew that the bomb was dropping close by.

Much more information is available from historians and via the wikipedia entry.

The Val Ygot site is an interesting place. This small spot, situated in a beautiful woodland, seems incongruous to its surroundings. When we visited, in France’s long off-season, only a handful of people came along, many with English speaking voices.

As with many such places, there is a sadness when wandering among the broken buildings. There is also a sense of wonder; such engineering and effort went into making these terrible weapons – it’s intriguing for us to see how they were managed and operated.

As well as the destroyed buildings, numerous craters cross the site and its surroundings. The trees appear to have mainly grown since the bombing, as some have grown through the paths and out of the craters.

At night, the site was incredibly dark and quiet, save for the occasional vehicle passing. With the memorials to those who lost their lives due to the V1 on our doorstep, it was a creepy couple of nights that we spent there.

I would recommend anyone passing through this area, or interested in WWII history come to this site. It’s easy to spend a few hours wandering amongst the buildings, putting together the story of how this site operated, and considering the grand scale of a war that, more and more, is being lost from living memory.